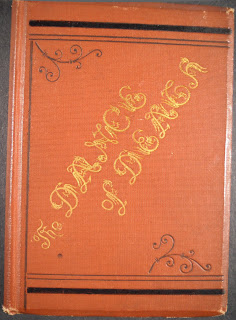 "DANCE, v. i.: To leap about to the sound of tittering music, preferably with arms about your neighbor’s wife or daughter. There are many kinds of dances, but all those requiring the participation of the two sexes have two characteristics in common: they are conspicuously innocent, and warmly loved by the guilty." -- Ambrose Bierce, The Devil's Dictionary

Ambrose Bierce was an American journalist, literary critic, and satirist during the end of the 19th century. Known to many as "Bitter" Bierce, he is now perhaps best known for his much-anthologized short story "An Occurrence at Owl Creek Bridge" and his satiric book of definitions known as The Devil's Dictionary.

Less well known is a work written by Bierce and his co-conspirator, Thomas A. Harcourt, called The Dance of Death. Purportedly penned by one William Herman and published in 1877, the book was a hugely successful hoax that argued for the abolition of the waltz because the dance was a "dark vortex, within whose treacherous embrace so many sweet young souls have been whirled to perdition."

The instant popularity of The Dance of Death resulted in an impassioned rebuttal that was published the very same year. The Dance of Life, by a Mrs. Dr. J. Milton Bowers, was written "to check the insolence of a Philistine." To that end, she dissects their book chapter-by-chapter, providing strident counter-arguments throughout. Still, despite Mrs. Bowers's fiery invective (or perhaps on account of it), there are some who believe that the second book itself was also a brilliant hoax, written by either Bierce or someone who knew him.