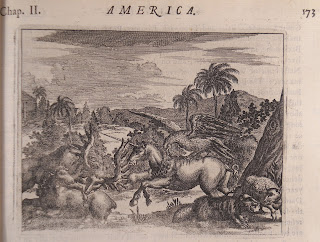 In 1671, publisher and writer John Ogilby created a compendium of all relevant information about the New World. In true 17th-century form, the title boasts of the book's expansive mission: America: Being the Latest, and Most Accurate Description of the New World; Containing the Original of the Inhabitants, and the Remarkable Voyages thither, the Conquest of the Vast Empires of Mexico and Peru, and other Large Provinces and Territories, with Several European Plantations in those Parts. Also Their Cities, Fortresses, Towns, Temples, Mountains, and Rivers. Their Habits, Customs, Manners, and Religions. Their Plants, Beasts, Birds, and Serpents. With an Appendix containing, besides several other considerable Additions, a brief Survey of what hath been discovered of the Unknown South-Land and the Arctick Region (London, 1671). Ogilby never traveled to the New World, so the book is based on travel accounts he had read ("Collected from most Authentick Authors").

The book is full of awesome weirdness. You can just picture Ogilby in London trying to sort out the various accounts to determine what was real, what was not, and what might help sell books. One account he found compelling enough to reproduce as fact, and even illustrate, was a description of a "strange beast" living on the borders of Canada. It "hath some resemblance with a Horse, having cloven feet, shaggy Mayn, one Horn just on their forehead, a tail like that of a wild Hog, black Eyes, and a Deers Neck." Observers not only saw this mythical beast, they were able to note its strange habits:

...it feeds in the nearest Wildernesses: the Males never come amongst the Females except at the time when they Couple, after which they grow so ravenous, that they not only devour other Beasts, but also one another.

Come see for yourself by asking for McGregor 129 (the unicorn is on page 173).