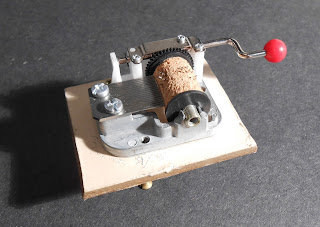 "Nice book"... not really what you think when you see an image of Angela Lorenz's "Cage." But that is because it is not a book. Obviously, it is a serial: volume three of her Light Verse Magazines.  This homage to John Cage's 4 Notes in 33 Variations is housed in a vanilla tin with the other four volumes of Magazines. The pins (33, naturally) spell out C A G E (4 letters, naturally).  Turn the handle and it sings out a discordant variation for your aural pleasure.

Each volume of Light Verse Magazines is its own elaborate homage to some event or artifact that caught the artist's attention. There is a fan that emerges from a fake cigar imprinted with the titles of books read in cigar factories; a poem written on paper folded to look like fossils; another poem printed on paper to form a ginkgo tree leaf in a test tube; and a paper construction of a "Sunday Stone."

We currently have a small exhibit of some of Angela Lorenz's work (including Binding Ties) to accompany the installation of her Victorious Secret in the Brickway Gallery in Baker-Berry Library. Both will be on display through Fall term.  After that, you can see "Cage" and Light Verse Magazines by asking for Presses L867lolig.