One of the most interesting items I’ve worked on is our copy of:

A title as long as the book is large!

Below is one of the more well-known images, sometimes referred to as the flayed angel.
(Rauner Blog Post  and info on Gautier.) 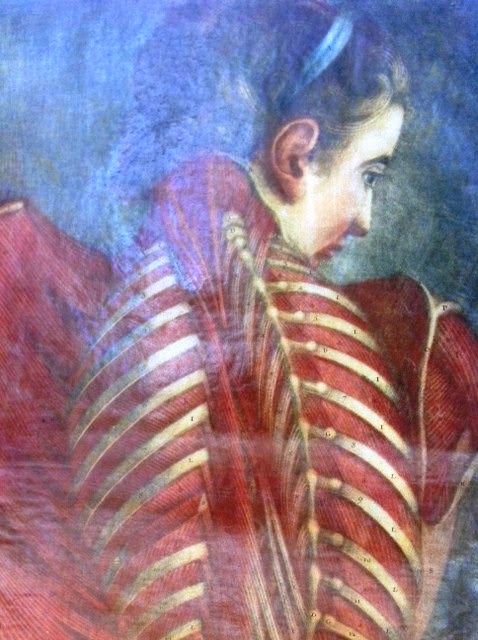 Anatomy volumes as this were used for teaching, thus their large size, so students could see them while dissecting cadavers. In fact while working on this volume there were stains that I would identify as blood stains. The problem with this volume was that it had been rebound perhaps in the late 50’s or early 60’s and had been over sewn, so that the pages didn’t open flat and the foldout illustrations were difficult to view. So the first task at hand was to “dissect” it. 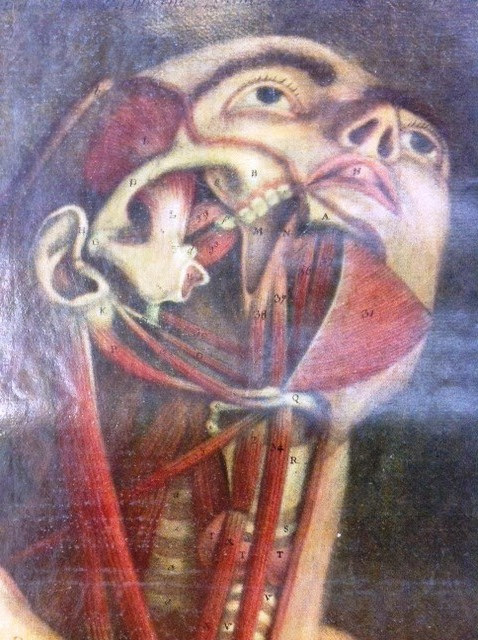 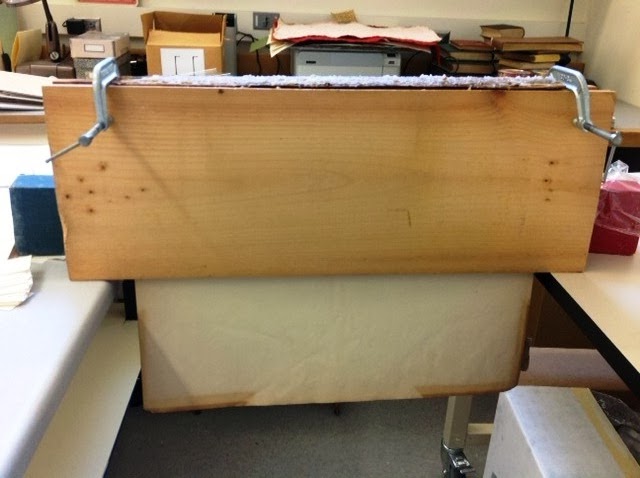 Because of the large size, I jerry rigged a press out of boards and c-clamps in order to clean the spine. Once the old adhesive was removed I was able to get at the pages and separate them 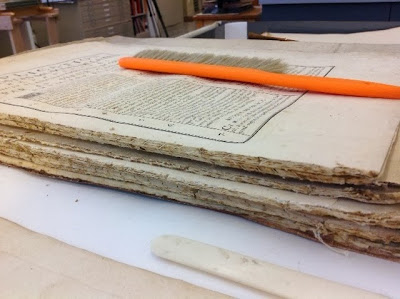 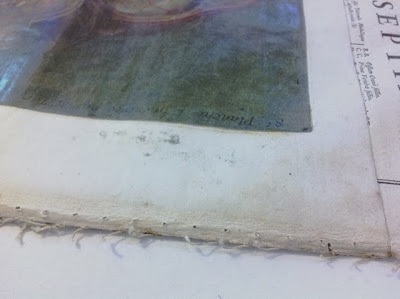 Here you can see the evidence of the over sewing. 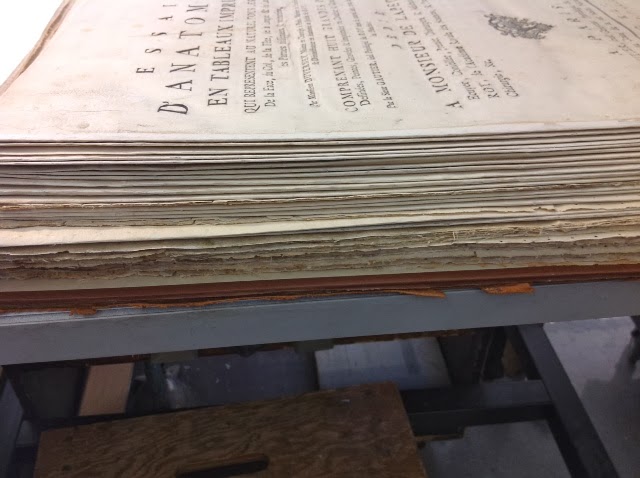 I then proceeded to mend the folds with a strong japanese tissue.
Here, half of the pages are finished being mended. 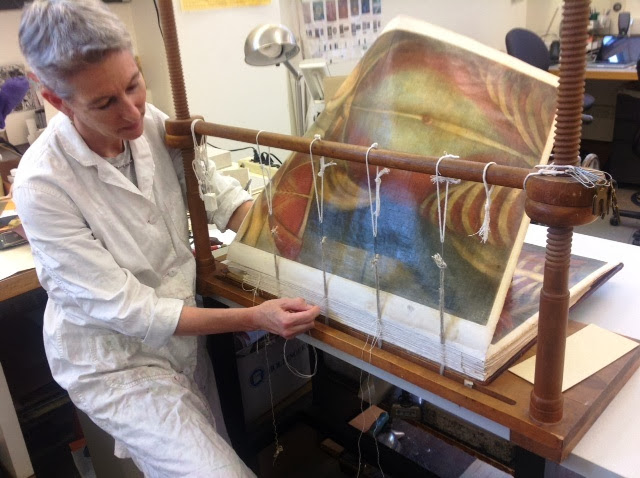 Once the folds were mended it was time to sew. This was a bit tricky but with the aid of a support this went smoothly. I decided to sew the signatures onto frayed cords, which could be used later to reattach the cover. 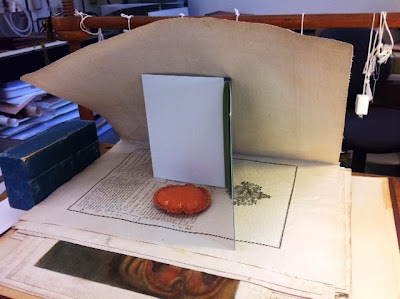 Inside support to hold open the folio.
The endsheets from the earlier binding were machine made and very acidic,
so I made some beautiful new endsheets from the Delphi paper made
at Twin Rocker in Brookston, Indiana. The weight and
color were perfect and I created 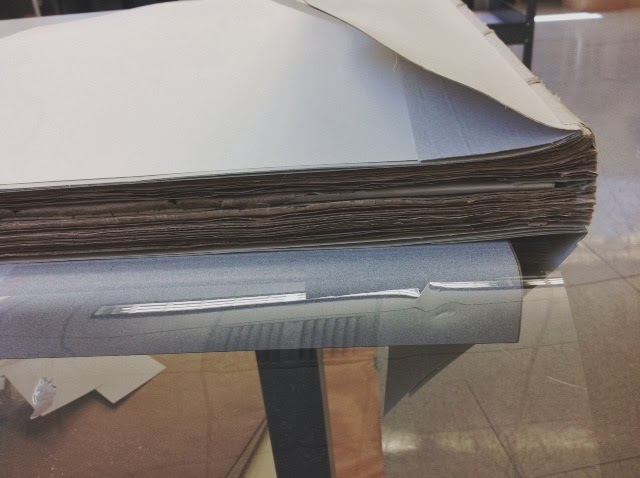 a split board style to help reattach the covers.
The covers were still in good condition and thick so all I did was remove the old paper paste downs. There was a natural split in the boards at the hinge edge, so I utilized this to my advantage to insert the tabs from the endsheets. 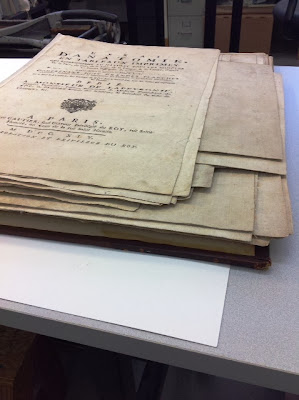 Once again I had to devise a plan for pressing the attachment of the
boards as the book couldn’t go into a press due
to the various sizes of plates and text. 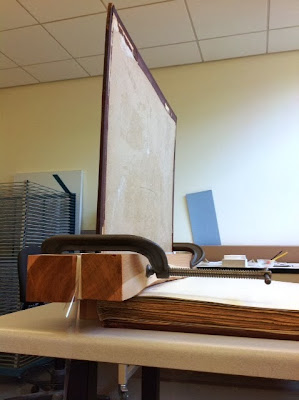 Luckily I had a carpenter friend who provided me with some thick planks which I could put a lot of pressure on with the c-clamps. This was needed to insure that the tabs and split were well adhered. Once the boards were firmly in place I pasted down the interior hinge onto the covers and then a deblure. 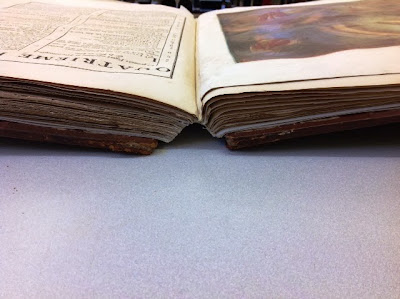 Opening of the book with attached boards but before the spine is reattached. 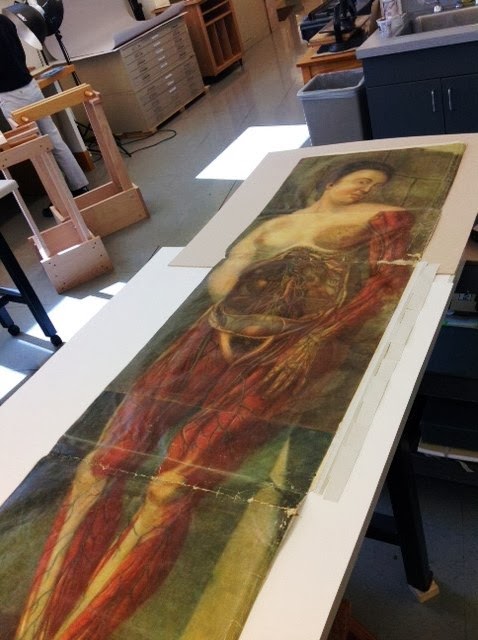 Included in this volume is a life size figure that has a tri-fold. This plate was very damaged with one of the sections completely detached (split at the knees). I reconstituted the fold out with a laminate of linen and japanese tissue and did some minor in-filling with japanese tissue and
added slight bit of color touch up but not much. 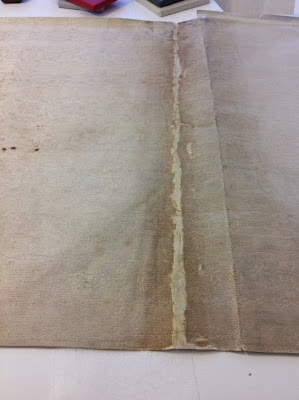 Verso of repair.
Because this was such a large plate and quite dynamic I designed a tab and slotted hinge so
that it could be removed when needed for easier viewing. This was somewhat successful
but it is a bit tricky to attach and remove 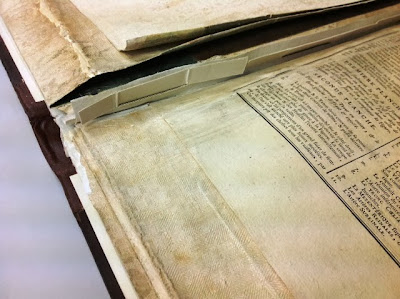 Tab and slot.
The spine material is a heavy canvas colored with acrylic to match the original leather. Inserts of cord were placed that the head and tail of the turn-ins for extra support and an aesthetic touch. 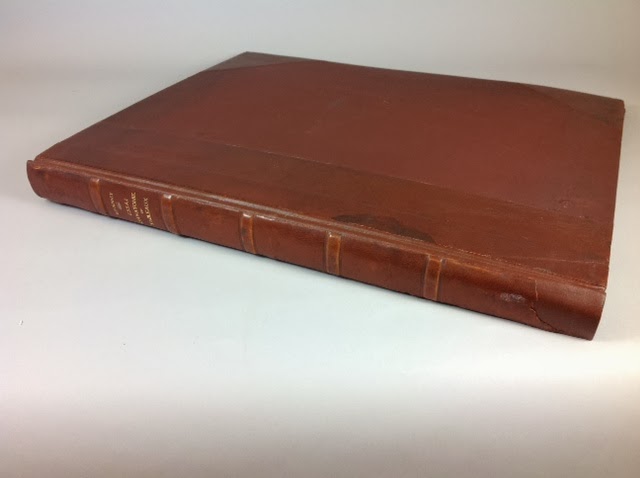 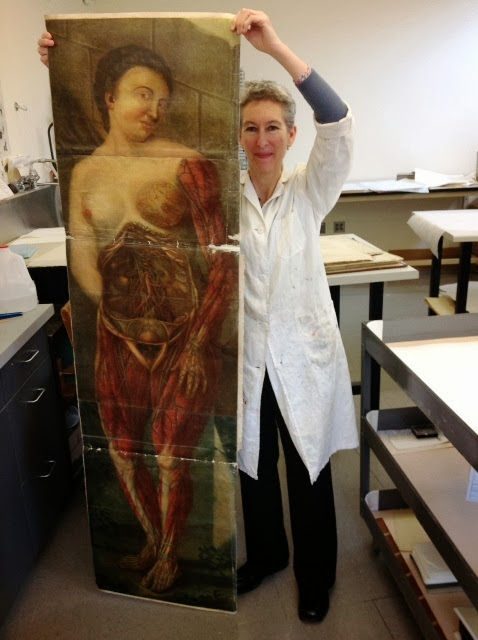