As Independence Day fast approaches, it is hard not to feel a sense of anticipation in the air. Perhaps it emerges from imminent firework displays, the onset of long summer days, remembrance of our Founding Fathers, or familial traditions of hot dogs, hamburgers, and all things red, white, and blue.
Thomas Paine and his work of propaganda, Common Sense, is often overshadowed by these familiar representations of Independence Day. Nonetheless, he is an important figure in America’s early history. Paine was an Englishman who immigrated to the United States in 1774. A publicist, writer and orator, Paine soon became very active in the fight for independence upon his arrival in Philadelphia.  In 1776, Paine published his pamphlet criticizing the British government and calling on the colonists to declare their independence and fight for freedom.

Common Sense became a sensation throughout the colonies and among the higher ranks of political greats such as George Washington and Benjamin Franklin. The relatively short work is remembered for its influential ideas and its impact on the American Revolution. For Paine and Americans in agreement with his arguments, independence was a want, a necessity, and, above all, their right. Rauner Special Collections Library has a copy of the tenth edition of Common Sense from 1776, the same year that the pamphlet was originally printed. The fact that a tenth edition was printed during its first year of publication demonstrates its true popularity. This particular copy was also quite popular with its previous owners: the wear and tear on the pages resembles a beloved novel that has been read and re-read. 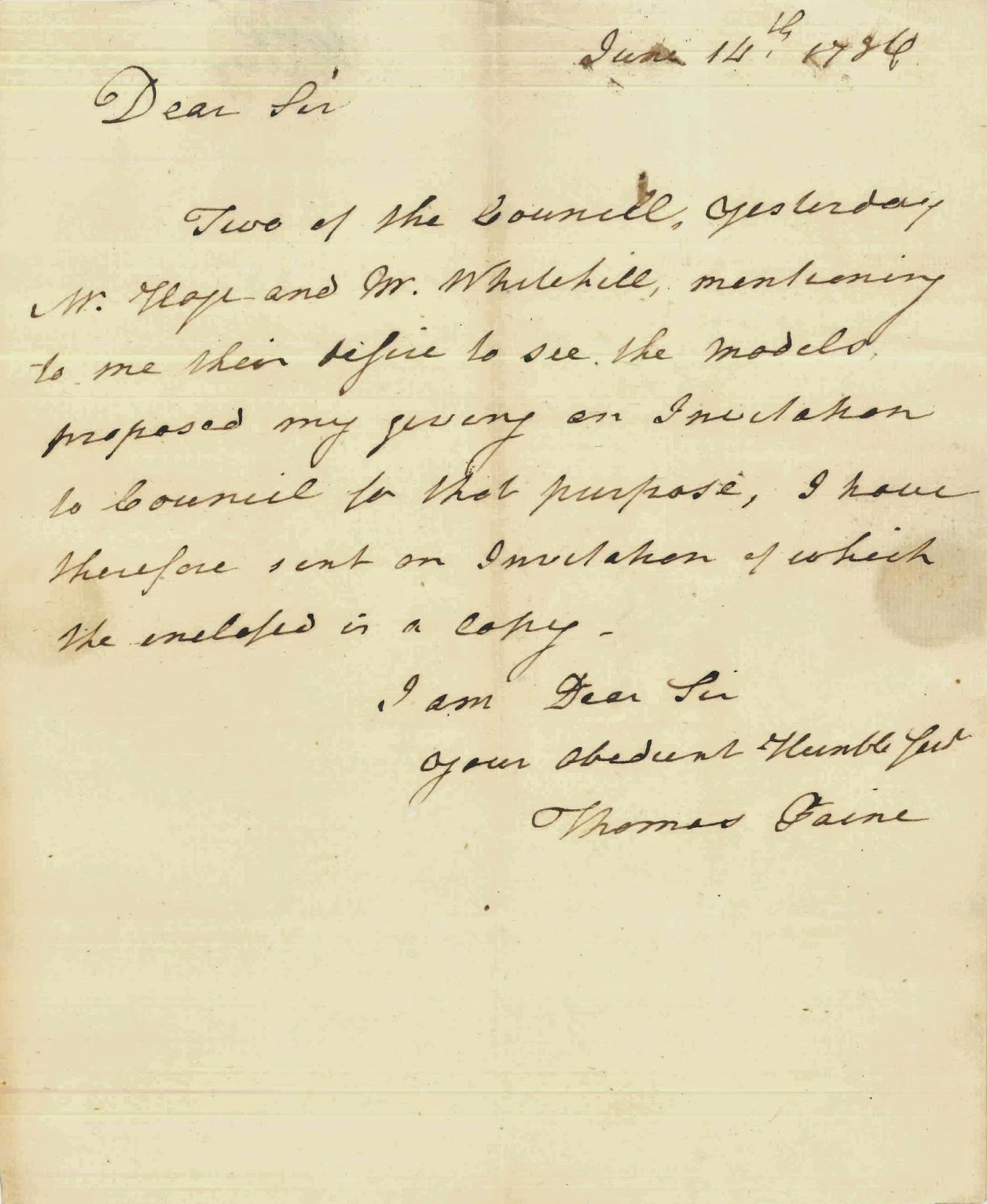 In addition to his interest in politics, Paine was also very focused on the sciences and is credited for experimenting with marsh gas, a smokeless candle and the construction of bridges. It is his passion for bridge-building that is fascinating to us here at Rauner. In our manuscript collections, we have a handwritten letter from Paine to Benjamin Franklin, dated June 14, 1786,  that references Paine’s homegrown bridge models. Franklin at the time had retired from his role as Ambassador to France and had assumed his new role as Governor of Pennsylvania. It can be concluded from the letter and some additional research that Paine and Franklin had a relationship akin to mentor and protege, which can be traced back to Paine’s first arrival in America: Franklin had met Paine abroad and had written a letter of introduction for him in the early 1770s. The relationship formed during those early days of revolution lasted into Franklin’s later years and was close enough to warrant Paine seeking Franklin’s observations on his bridge models; the two men evidently shared a passion for more than politics.
To see our copy of Paine’s Common Sense, ask for Rare E211 .P126 1776.
To read Paine’s letter to Benjamin Franklin, ask for Ticknor MS 786364.1.