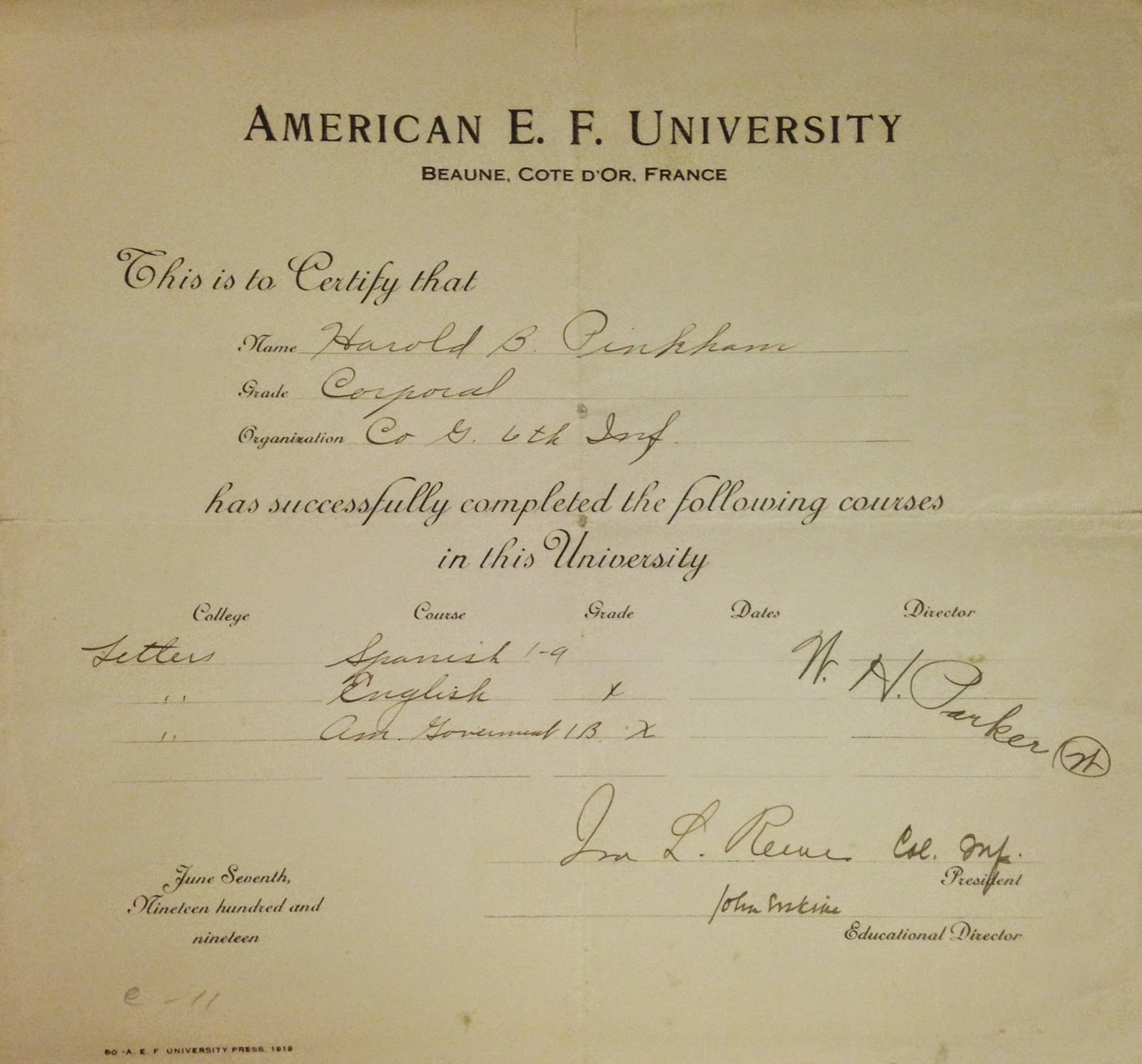 As a young man at Dartmouth and in the military, Harold Pinkham, Class of 1915, was a confused and unhappy outsider. At Dartmouth, he was not athletic enough to make a sports team nor popular enough to make a fraternity and recalled being targeted during the customary freshman hazing of the period. After one year at Dartmouth, he transferred to Bowdoin, but stayed there only one year before leaving to live as a self-described hobo in the American West.

On April 17, 1917, in his father’s shop in Milton, New Hampshire, Pinkham read the headline announcing America’s Declaration of War. He had always supported Wilson’s neutrality as “a beacon of light in the darkest age of mankind” and saw no justification to assume that France and Britain were right, or that Germany was wrong.[1] Pinkham realized that, as a healthy, unemployed, single man of 22, he would be drafted.[2] He could not register as a conscientious objector, because he did not belong to a recognized religious sect that prohibited fighting in wars. He chose to evade the draft and went west when the draft was announced. During his sojourn in the American West, Pinkham held a variety of jobs, including laying railroad track in Idaho and working in a lumberyard in Everett, Washington.

In June 1917 Pinkham had a sudden change of heart. On his birthday, June 16, 1917, Pinkham signed up for the Washington State National Guard and was given the rank of corporal because of his college education. In his edited war journal, Pinkham claims to have been unaware that he was not joining the U.S. Army. In April 1918, the distinction between the National Guard and U.S. Army was erased, but it seems implausible that a year before this merger Pinkham would not have known which division of the military he was joining.[3] Pinkham attributes his change of mind to financial need and renewed faith in Woodrow Wilson’s idealism.[4]

Pinkham was chronically dissatisfied with his duties during the war. After attempting to evade the draft, he complained that his six months in Seattle were too tame. When he was finally sent to France in December 1917, he was indignant and insulted that his section’s job was to lay track in Is Sur Tille in the Cote d’Or, the same occupation he had pursued in Idaho. Pinkham considered himself “practically a prisoner” and compared his condition as a soldier to the position of German P.O.W.s. After falling ill from “weak kidneys and a violent back ache,” he was reassigned to sorting boxes for the quartermaster while the rest of his section dug trenches and set up machine guns to protect against air raids.[5] Pinkham argued that other units should be doing the digging, and that his unit should be dispatched to the front.

Pinkham’s dissatisfaction continued throughout the war. In May 1918, Pinkham’s unit left Is Sur Tille and he wrote eagerly that he hoped to be done with “drill and senseless games.”[6] Instead of going to the front, however, he was transferred to Pont Levoy to train newly arrived infantry sections, who “a month earlier were in civilian clothes . . . many of them ignorant to how to load a rifle and destined for slaughter, just as surely as the lambs in the Chicago stock yard.”[7] He was then summoned to St. Dizier, Marne, a city close enough to hear the gunshots from the fighting in the Argonne Forest, but instead of fighting, he cared for casualties. Pinkham was extremely disappointed by what he perceived as his disgraceful war record: “it seemed that all my life had been a failure, in college, business, art, and love. And now, within earshot of the guns, I was to fail at war.”[8] Pinkham had hoped that his service would be a source of personal redemption.

In the beginning of November 1918, he sensed an approaching Allied victory and complained to a Marine Sergeant that he would never have the opportunity for combat experience. According to Pinkham’s journal, the sergeant suggested that he join his section by impersonating an AWOL private and advance on Verdun with them. Pinkham took his suggestion and marched with them out of the camp, but the unit took the wrong route. They turned around and returned to Froidos, and Pinkham took advantage of the change to steal back to his quarters. Despite his persistent demands to be placed at the front, Pinkham lost his nerve and decided not to advance with the Marines. This did not prevent him from complaining that he was kept in France as part of the Army of Occupation when others went home. When Secretary of War Newton Baker visited the troops, Pinkham joined the others in crying, “We want to go home!”[9] Pinkham maintained no clear ideology, but was instead guided by persistent melancholy.

Like many soldiers, Pinkham tried to alleviate his depression through escapism. He drank with his fellow soldiers regularly and sometimes to excess. When he vomited in his quarters, he blamed the monotony of the noncombatant life and excused his behavior as the natural result of war.[10] During his time in the military Pinkham frequently pursued sexual relationships with women. In Seattle he saw the daughter of one of his older friends and visited Seattle’s red light district. In France he had an affair with a young French widow and later hired a prostitute while on leave. Pinkham derived little comfort from these distractions and could not live up to his own shifting expectations about his military career.

Pinkham considered himself in a personal crisis during his war years, and used literature to develop his beliefs. When he read Tolstoy’s Anna Karenina, he saw his own religious struggle in the philosophical agnostic protagonist, Levin. Later when reading Maurice Hewlitt’s Open Country, he identified with the wandering poet protagonist. For a while he read novels by H.G. Wells and tried to adopt a fatalistic attitude. Finally his reading of the New Testament converted him to Christianity. He handled the strains of war both stereotypically through sex and alcohol but also more individually through his philosophical and literary interests. Throughout his war years, Pinkham futilely searched for a philosophy that seemed meaningful to him and an antidote to his persistent malaise. After the war, Pinkham felt strangely uncomfortable in America after so long an absence. He continued his wandering life, but then settled down as the postmaster in his hometown of Milton, New Hampshire.

Harold Pinkham ‘15
Milton, New Hampshire
Corporal, 161st Infantry, Formerly the Washington National Guard
This Series: During World War I, 3,407 Dartmouth men were uprooted from campus, graduate school, or their early careers to serve in a modern war unlike any previous American military engagement.[11] Four of them, Harold Pinkham ’15, George Dock ’16, Edward Kirkland ’16, and Wainwright Merrill ’19, left records of their war experience in the Rauner Special Collections Library. All four matched the demographics of the College at the time and were united by their experiences at progressive prewar Dartmouth, but despite their somewhat similar backgrounds, their personalities were quite different. Their stories speak to the diverse beliefs, experiences, and sources of comfort of Dartmouth men involved in World War I.
Ask for MS-62.