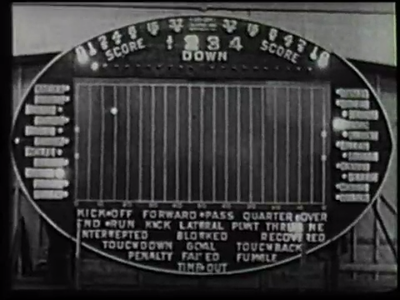 Last fall, a new high-definition video scoreboard was erected on Memorial Field. Unbeknownst to most Big Green fans today, this marked the 90th anniversary of a different type of scoreboard: the Grid-Graph from November 1923. In fact, this scoreboard never saw the field at all—it was set up in a handball court at the gym, to recreate away games at home for those who couldn’t make the trip.

The Grid-Graph board measured 15 feet by 12 feet and featured a glass replica of a football field. The team names, score, and number of downs were listed across the top, and player names along the sides. Below that were the various plays, like punt, interception, or touchdown. Operating the board was a multi-person production. One man made transcripts of the Morse code coverage coming in by telegraph, and then another relayed these as instructions to those controlling the lights. A switchboard operator lit up a bulb next to the play being made and the players involved. Meanwhile, a final man moved a free-standing bulb behind the glass to represent the ball’s position on the field. Of course, he only knew the yard markings and not the ball’s exact spot, so some artistic flourishes were allowed to create drama and suspense. 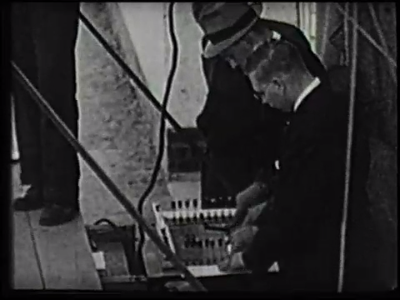 The board cost a thousand dollars at the time, but seems to have been well worth it. Wooden stands in front of the Grid-Graph filled up half an hour early, and each audience member paid admission. During the game, someone led cheers (though there was no team to hear them) and vendors walked among the crowd selling hot dogs and soda. The audience could even get rowdy. In the October 1980 Dartmouth Alumni Magazine, one Grid-Graph operator recalled a game in 1931, when Dartmouth made a miraculous 23-point comeback to tie with Yale. The fans went wild. As in, ravenous.

“That crowd came out of those swaying stands and across the floor bent on getting some souvenirs of the game from the board. We had to rush out in front and fend them off or the whole thing would have caved in on us all. They tore out the players’ names and got a few lights, but we saved the board.”

Although the board survived that trial, it would not survive dwindling attendance and funds over the following decade. In 1941, the Grid-Graph was quietly put to rest. 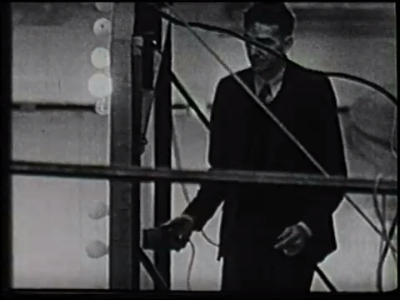 To see pictures of the old Grid-Graph and a cardboard replica, ask for Rauner Photo Files: Football—Grid-Graph Board. Or, see them online here from the Digital Library Program.