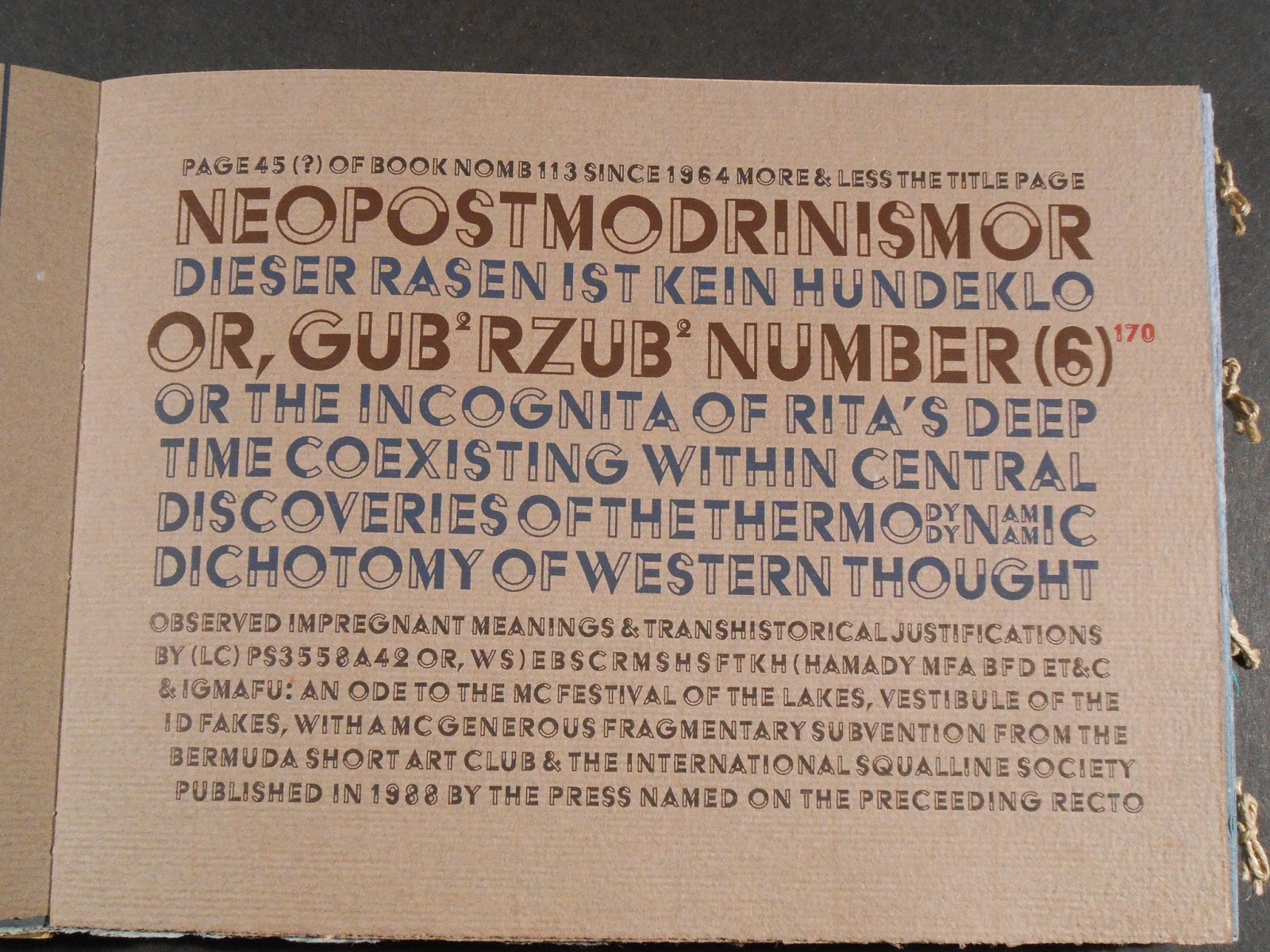 So what exactly is a Gabberjabb? When you flip through Walter Hamady’s Gabberjabb No. 6, you encounter a multi-layered, surrealist autobiography that walks a tightrope between sense and nonsense. Hamady’s art epitomizes the virtues of letterpress printing and book design while simultaneously poking fun at assumptions about the structure and function of books. In Gabberjabb No. 6 (its lengthier official title is Neopostmodrinism or Dieser Rasen ist kein Hundeklo or Gabberjabb Number 6), Hamady seeks to expand the book form by disturbing codified reading conventions and exploring the nuances of typography through continuously footnoted poetry and prose. 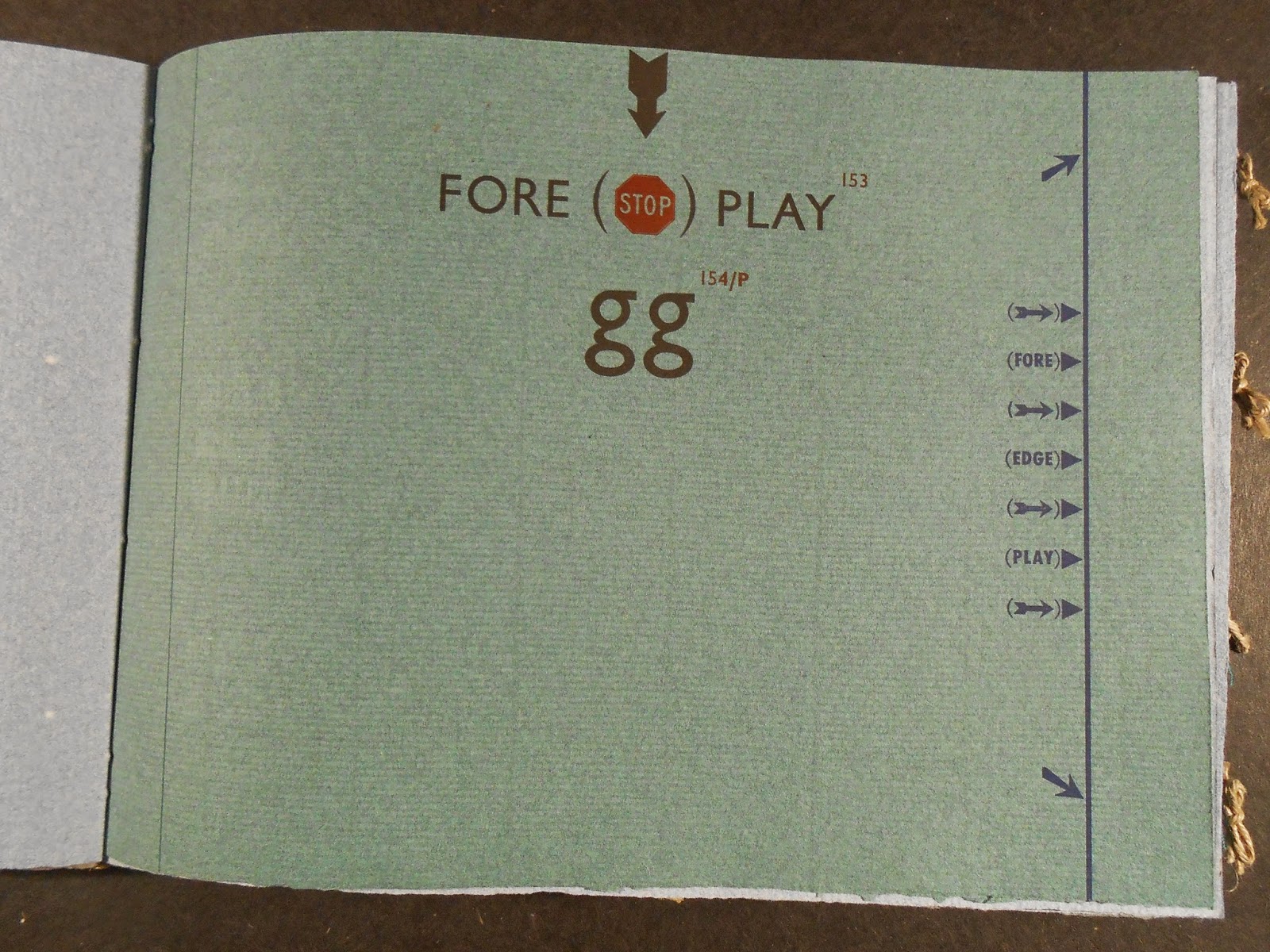 In Gabberjabb No. 6, Hamady calls attention to the structural elements of book form that are normally taken for granted by readers, such as title pages, indices, footnotes, signatures, margins and gutters, and makes them the centerpiece of the book.

A particularly memorable play on book form in Gabberjabb No. 6 consists of a series of page gutters adorned with anatomical drawings of intestines. Hamady draws attention to an empty section of the page that most people never see because of centuries of reading conventions that have conditioned us to focus on the text block in the center of the page and disregard the empty space surrounding it. For Hamady, the gutter or “guts” of an open book is the center of the picture plane and should be considered a significant structural element of the book. 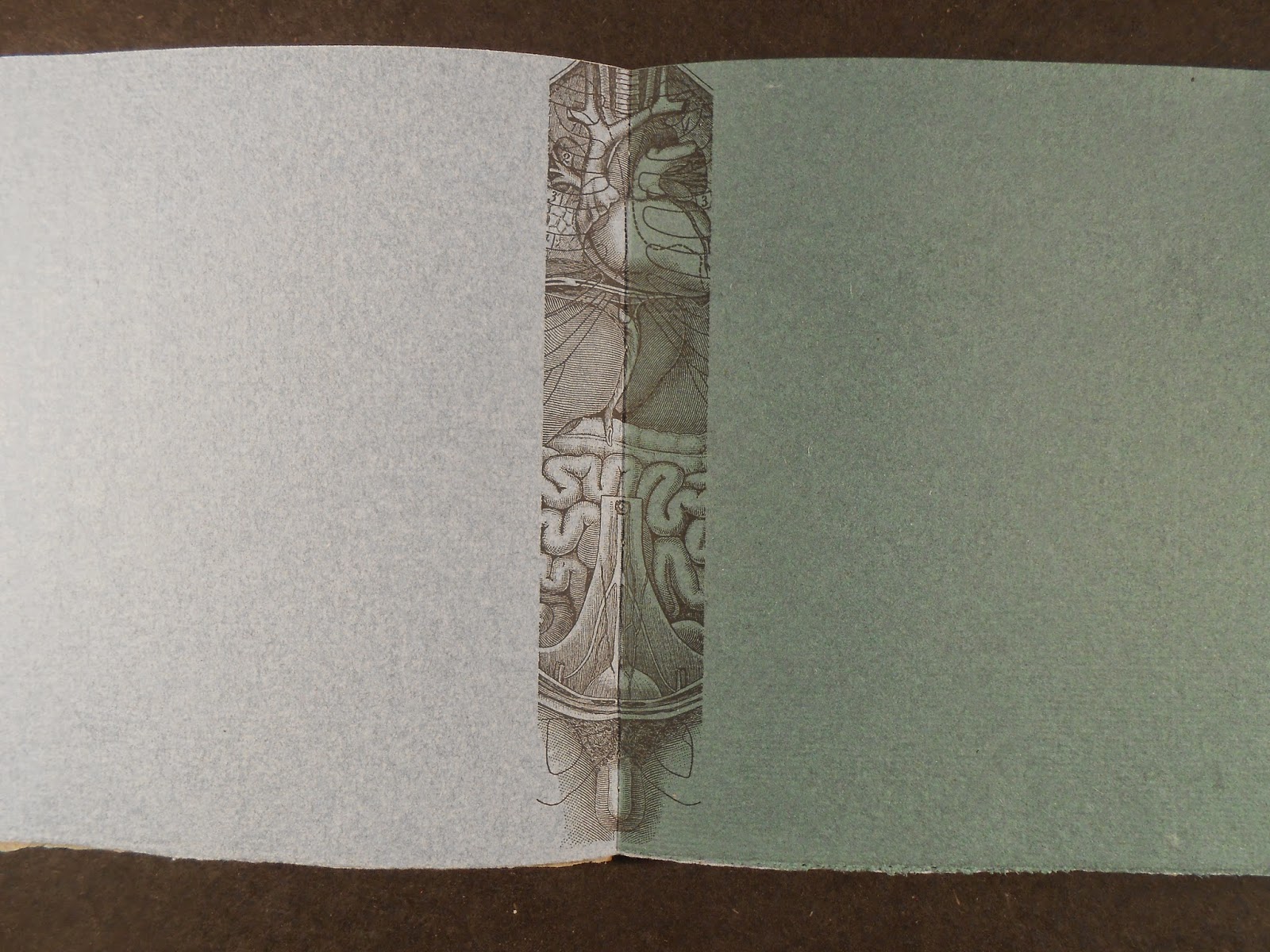 Through his ingenious and abstract play on book structure, Hamady warns against the kind of reductive reading that focuses on the book’s content at the expense of its form. The self-conscious manipulation of standardized rules regulating book form is intended to increase the readers’ awareness that such conventions exist and influence the construction of meaning. In many ways, this book can be considered a meta-critique on conventional understandings of “bookness”; it seeks to challenge our traditional notions of book form by reevaluating how form works in conjunction with content to convey meaning. 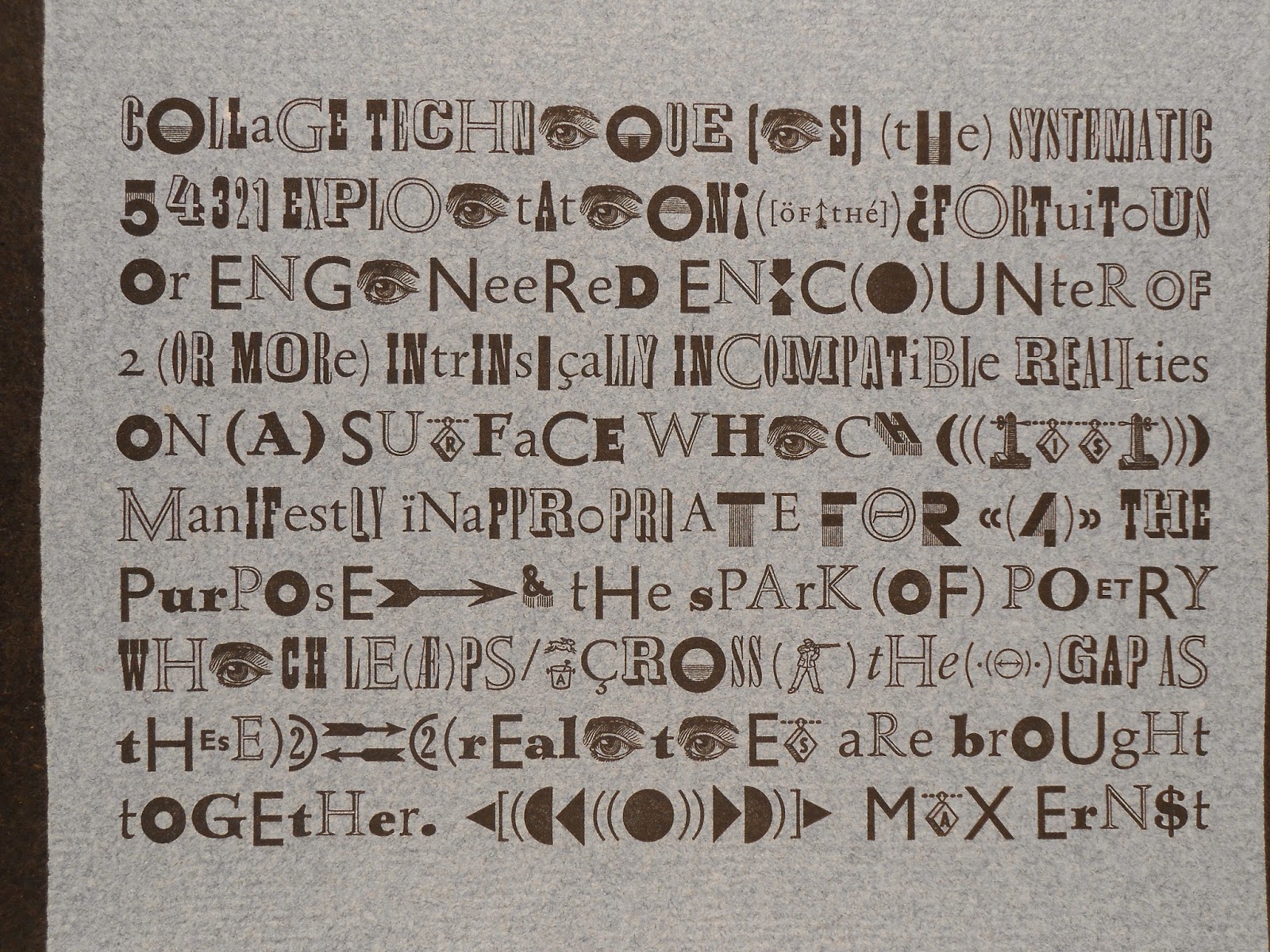 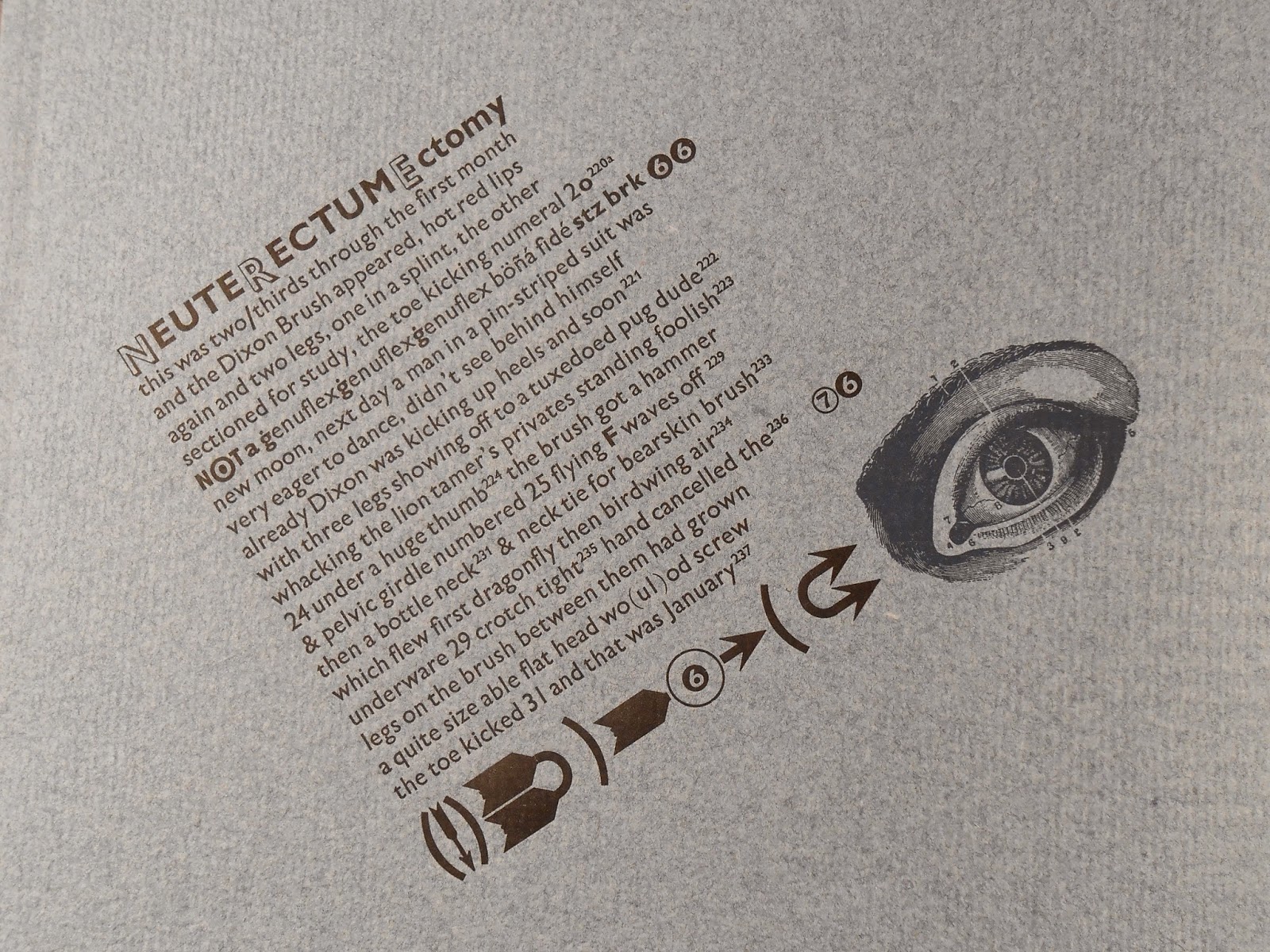 To see Gabberjabb No. 6, ask for Presses P4187hne. Gabberjabb No. 6 is part of an eight volume series called Interminable Gabberjabbs and volumes 5-8 are available at Rauner as well, along with over twenty other artists’ books by Hamady.