For over 25 years the Book Arts Workshop has welcomed students, faculty, and community members to explore the world of book arts. To celebrate what is possible in the Book Arts Workshop, the Dartmouth College Library hosts a competition for the Book Arts Prize. Each Spring students and community members (faculty, staff and local residents) put forward their best work from the academic year for our judges to assess. These judges often have a tough time deciding among the fantastic works that have been produced. Whether the books, broadsides and other printed pieces came about as a class project or out of curiosity and fun, everyone enjoyed a chance to learn about printing and bookbinding and to work with their hands. The prize winning pieces are on display in the Treasure Room Hall of Baker-Berry Library and will remain through the 2018 fall term.

The other entries that made the judges decisions difficult: 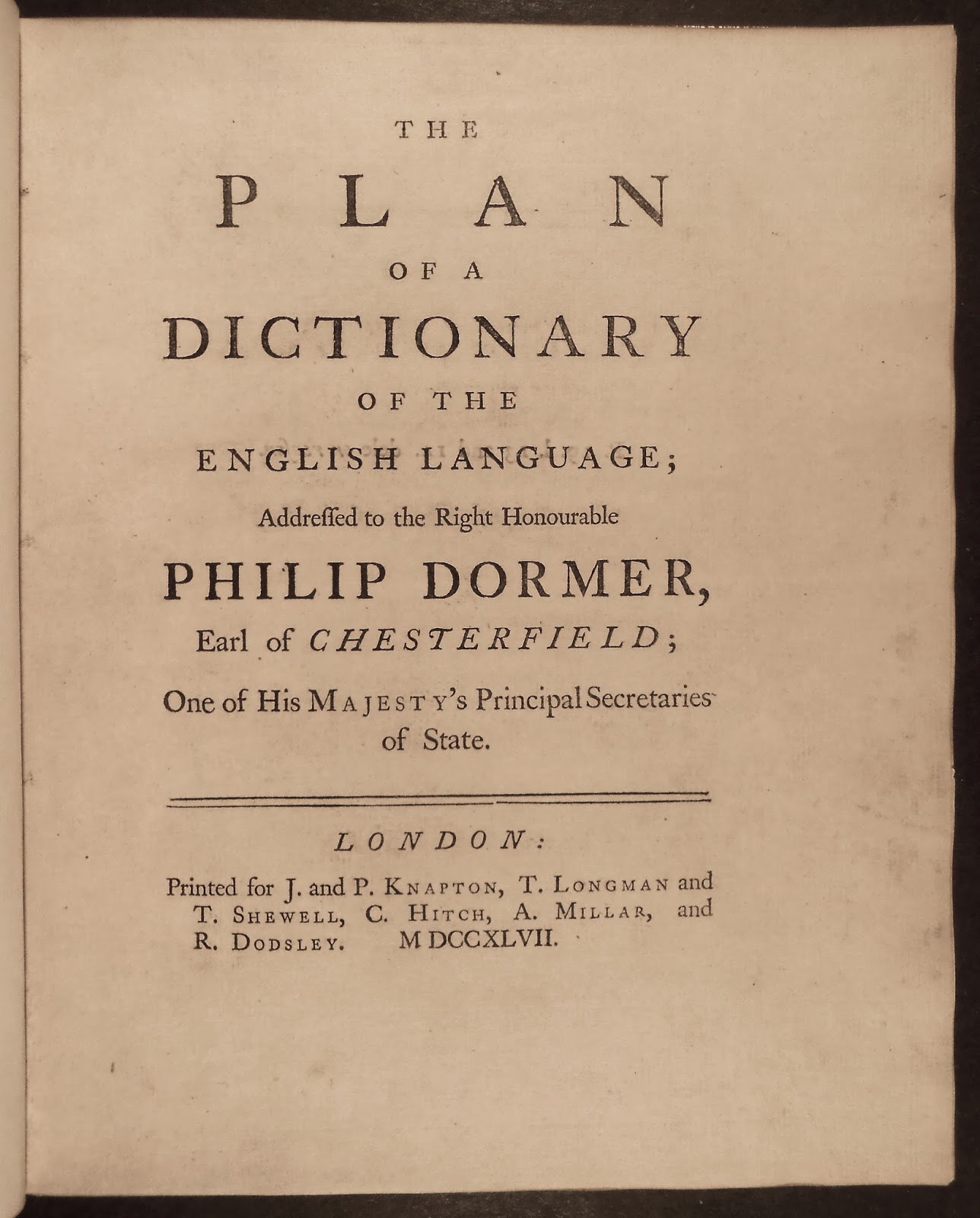 Samuel Johnson's Dictionary of the English Language (London: W. Strahan, 1755) is an authorial tour de force. That one person could possibly assemble a dictionary basically on his own of such a scope is astonishing. The two densely packed volumes took nine years of his life to write.

Johnson received patronage of a sort for his work. Besides receiving money from a group of booksellers who supported the project, he also secured Lord Chesterfield's support through his Plan of a Dictionary (London: J. and P. Knapton, 1747). Chesterfield wrote an essay in support of the project, but in so doing, offended the sensitive Johnson. Johnson held a grudge and retaliated in a backhanded way in the dictionary itself. His first definition of "Patron" reads:

1. One who countenances, supports or protects. Commonly a wretch who supports with insolence, and is paid with flattery. 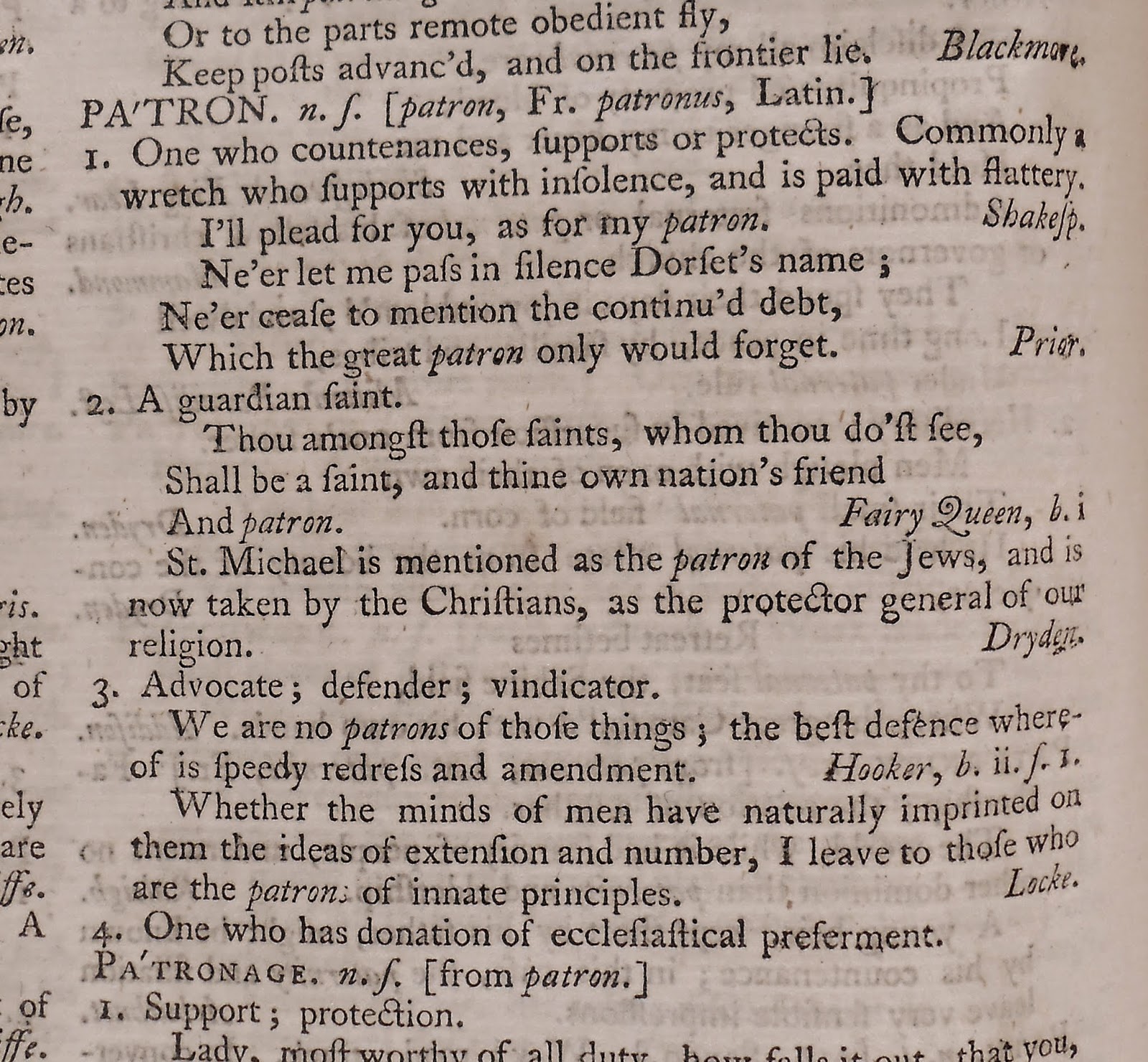 Johnson buried a few other precious barbs in his text. He defines oats as "a grain, which in England is generally given to horses, but in Scotland supports the people."

And another thing... the book inside that box with noxious chemicals. The reason we took a look in the box in the first place is because the book within is a "colonial edition" put out by George Bell and Sons. Colonial editions were a ploy used by British publishers to protect their market share in the colonies by offering current literature at cheaper prices.

This book is part of Bell's "Indian and Colonial Library" of books "issued for circulation in India and the Colonies only." We have another colonial edition of another Crane novel, Active Services (London: William Heinemann, 1900), that states more boldly "Issues for sale in the British Colonies and India, and not to be imported into Europe or the United States of America." The result was to stunt local production and maintain British publishing dominance.

We found a new one this week. Our copy of the "Colonial Edition" of Stephen Crane's Last Words (London and Bombay: George Bell and Sons, 1902) is housed in a Masonite box painted yellow with a faux spine tricked out in red leather. The box alone is an oddity, with a sliding top to allow access to the book inside. Then we saw what was inside the box other than the book... 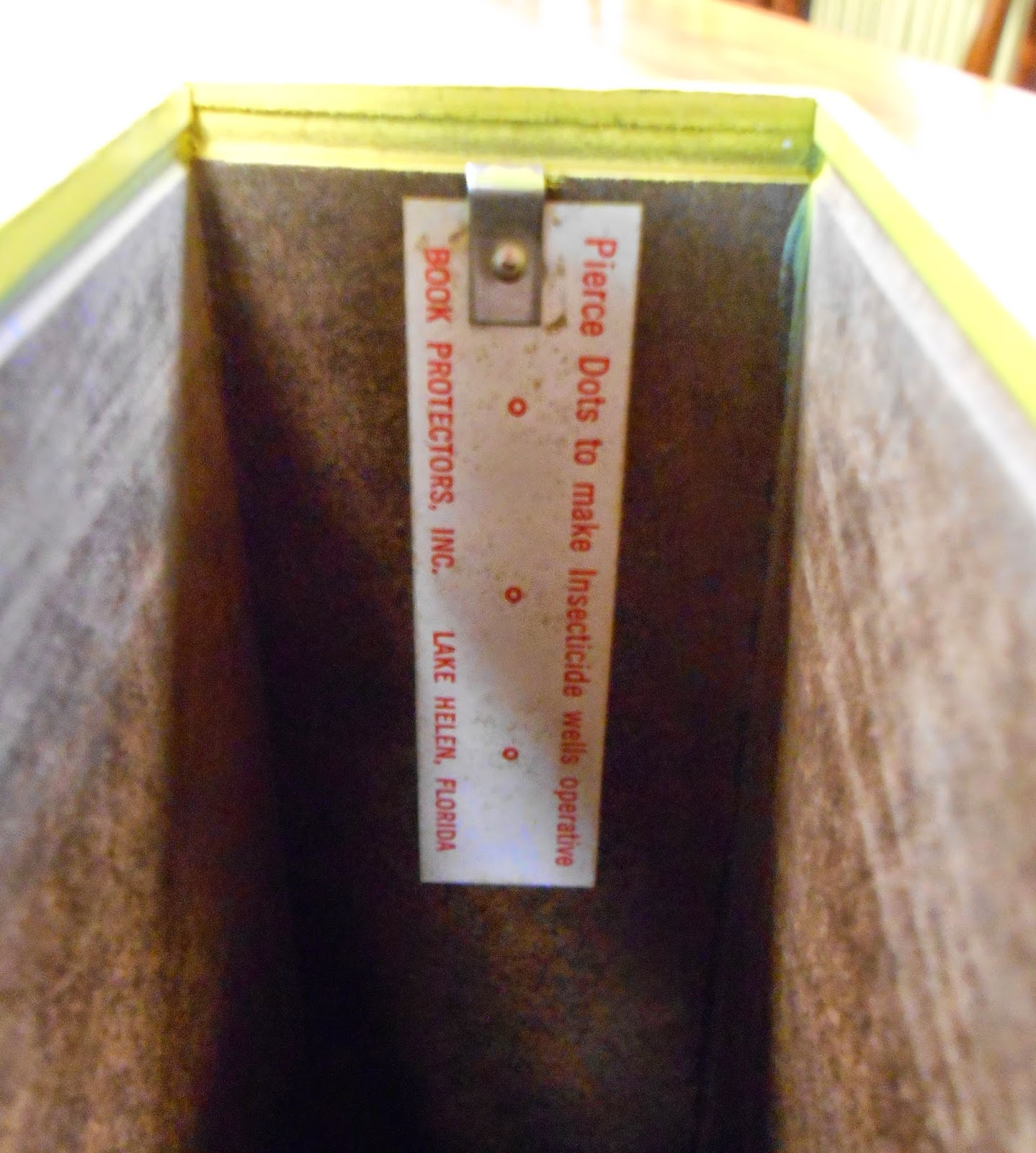 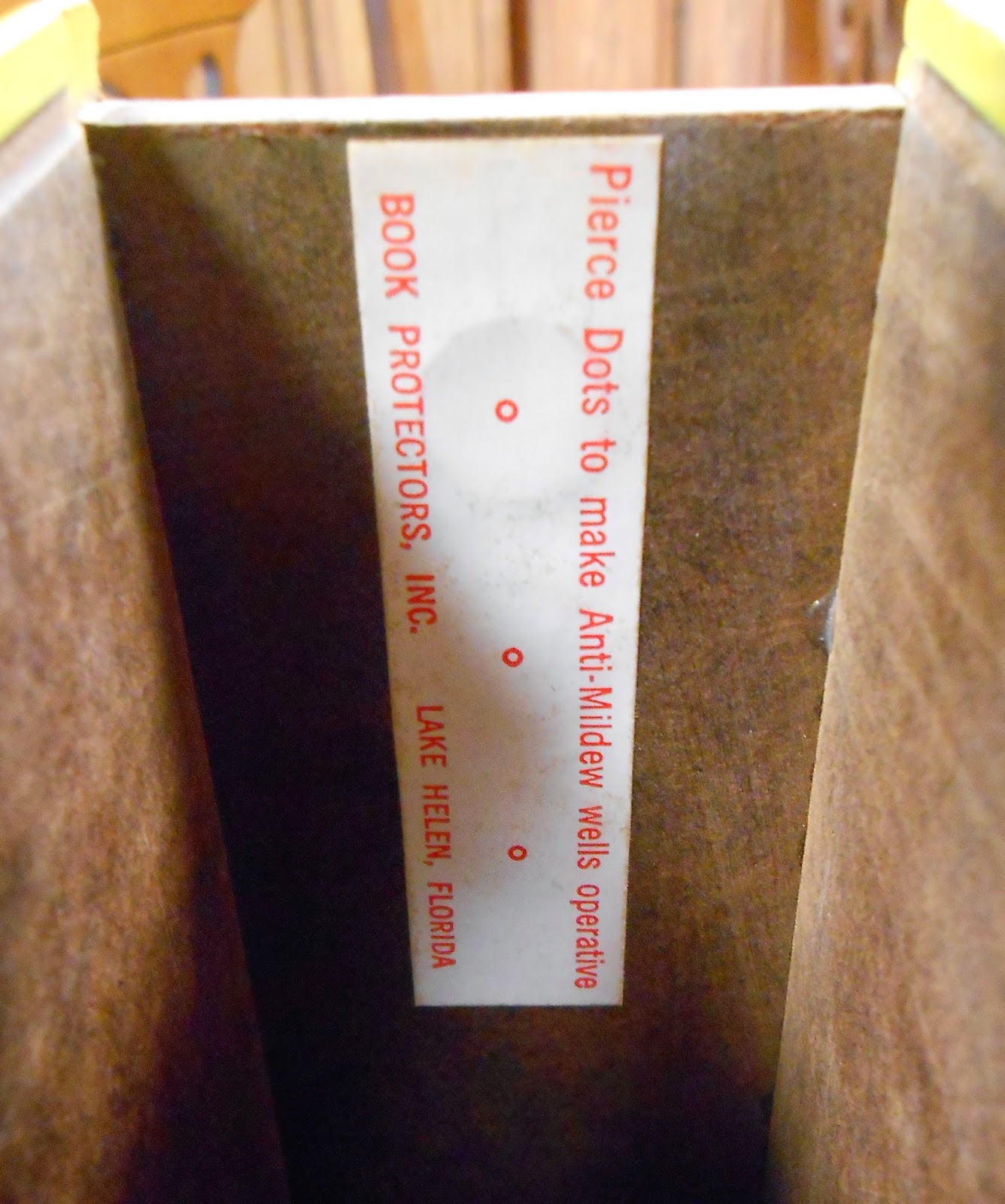 Oooh, who knows what nasty chemicals reside under the (thankfully) non-pierced dots? Of course, if ever you needed protection from mildew and insects, it would be in Florida. We recommend washing your hands after using this one. Ask for Crane PS1449.C85 L34 1902. 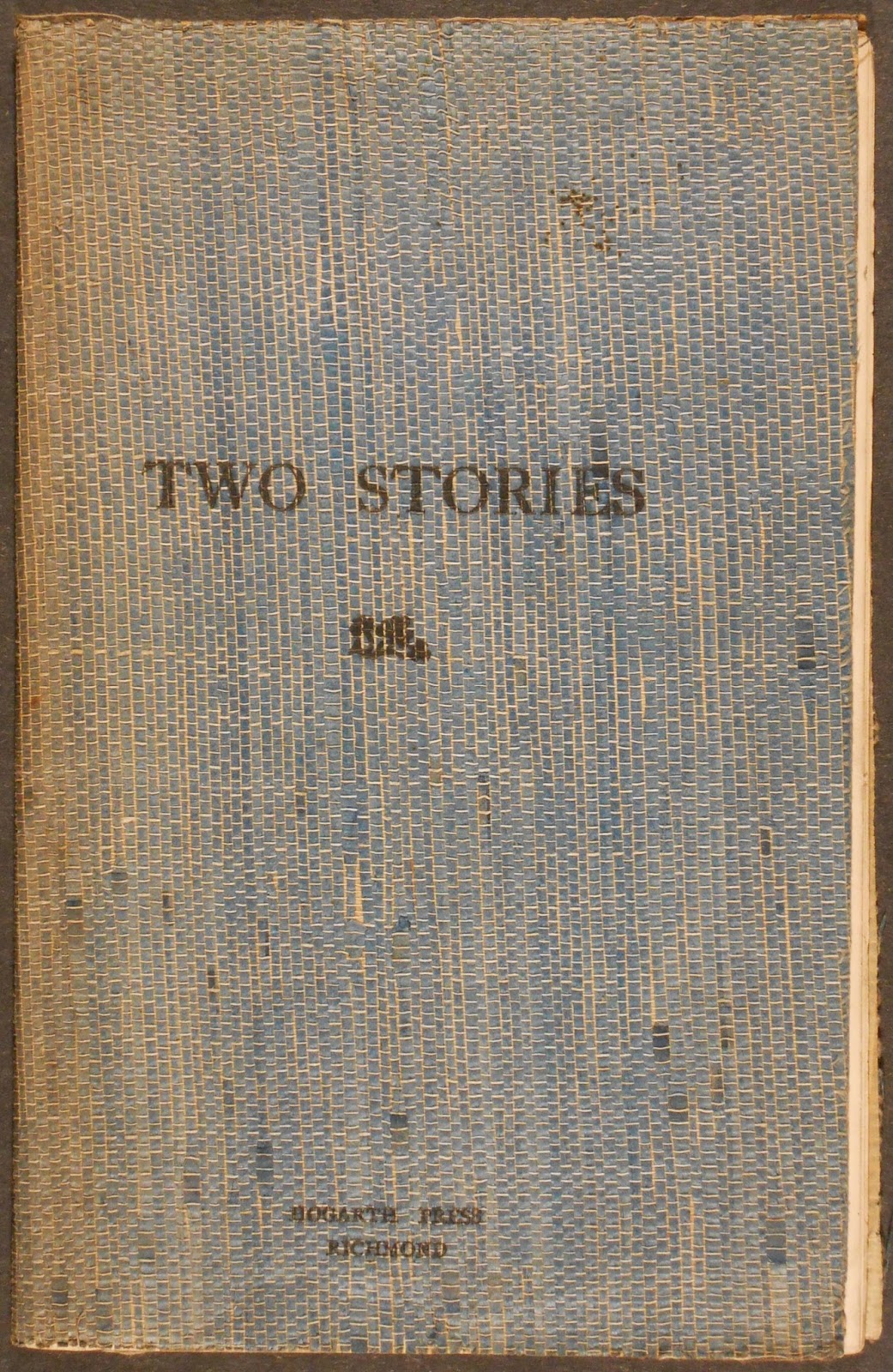 We have written about the aura of the Hogarth edition of T.S. Eliot's The Waste Land, but our recent acquisition of the first book Leonard and Virginia Woolf produced at Hogarth Press is positively spine tingling. Two Stories (Richmond: Hogarth Press, 1917) is a simple 32-page, pamphlet-style book. The wrapper appears to be a blue woven wallpaper (but we can't tell for sure) loosely sewn on to protect the text block and add a bit of decorative appeal. The book has the feel of two people trying to figure out how to wed their new-found book aesthetic with their literary style. 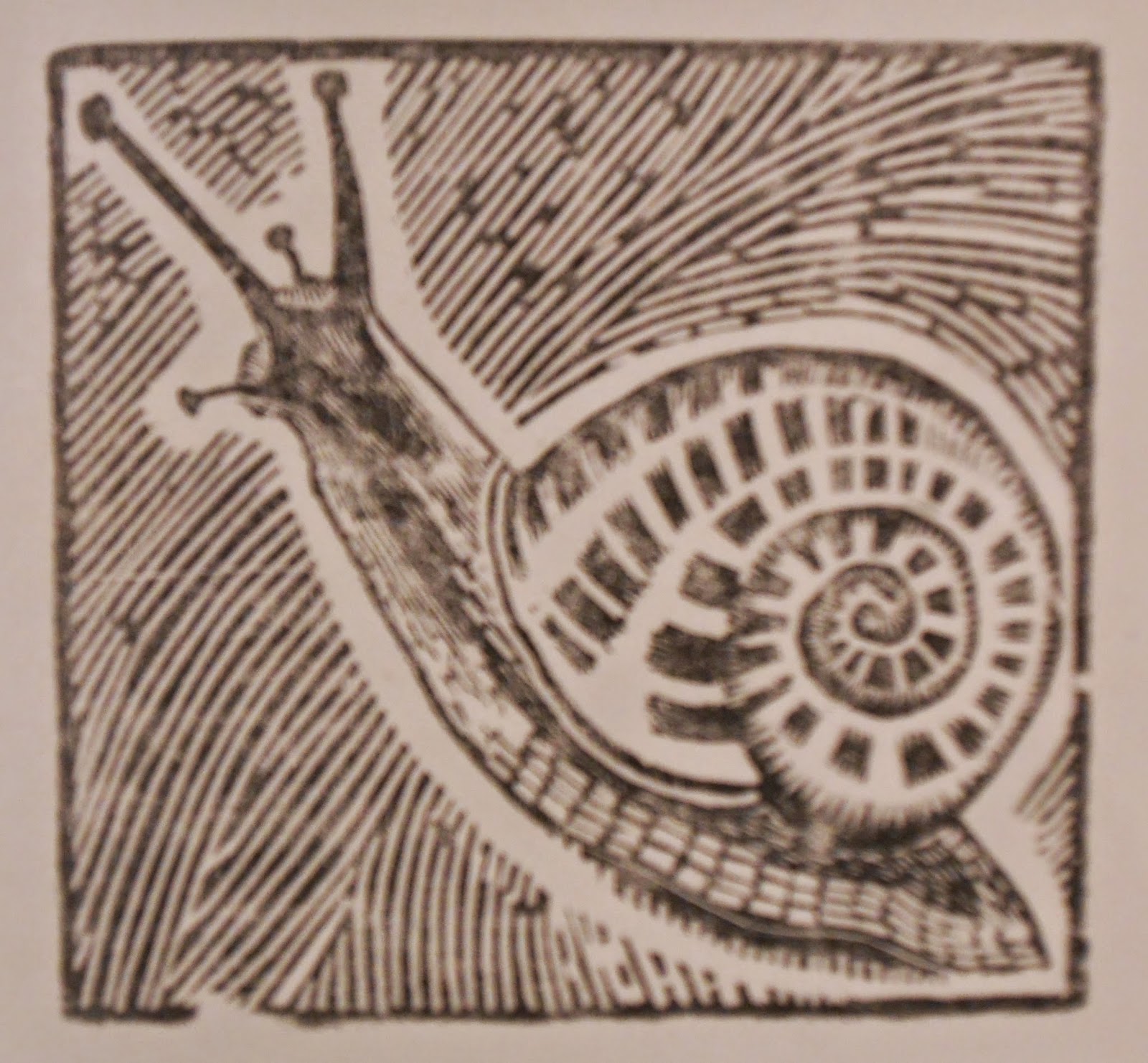 It offers a perfect entry point into the Bloomsbury group: our copy belonged to Virginia's sister, the artist Vanessa Bell; the woodcuts are by another Bloomsbury artist, Dora Carrington; and, of course, its authors are key figures in the group. Two Stories also reflects their struggle for artistic independence as Hogarth was founded in part to free Virginia and Leonard from the conservative tastes of the literary publishing establishment. It gave them complete control--they could even bind in wallpaper if they saw fit. 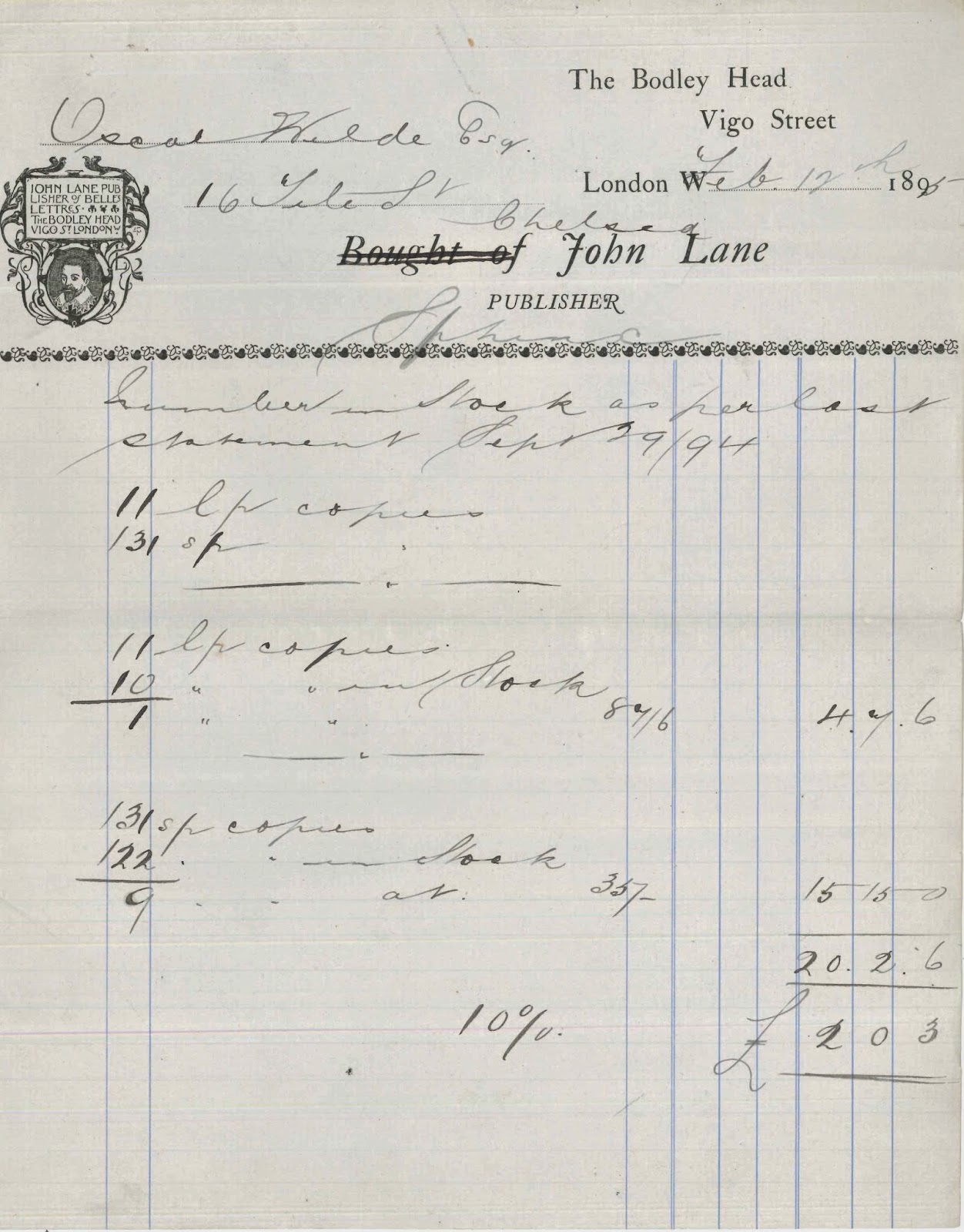 Tucked into one of our copies of Oscar Wilde's The Sphinx (London: Bodley Head, 1894) is a fragment of a Wilde poem in his hand and a royalty statement from his publisher, John Lane. As of February 1895, 132 copies were still in stock and only nine had sold since the previous statement in September. Lane calculated the 10% royalty at two pounds, no shillings, and three pence. 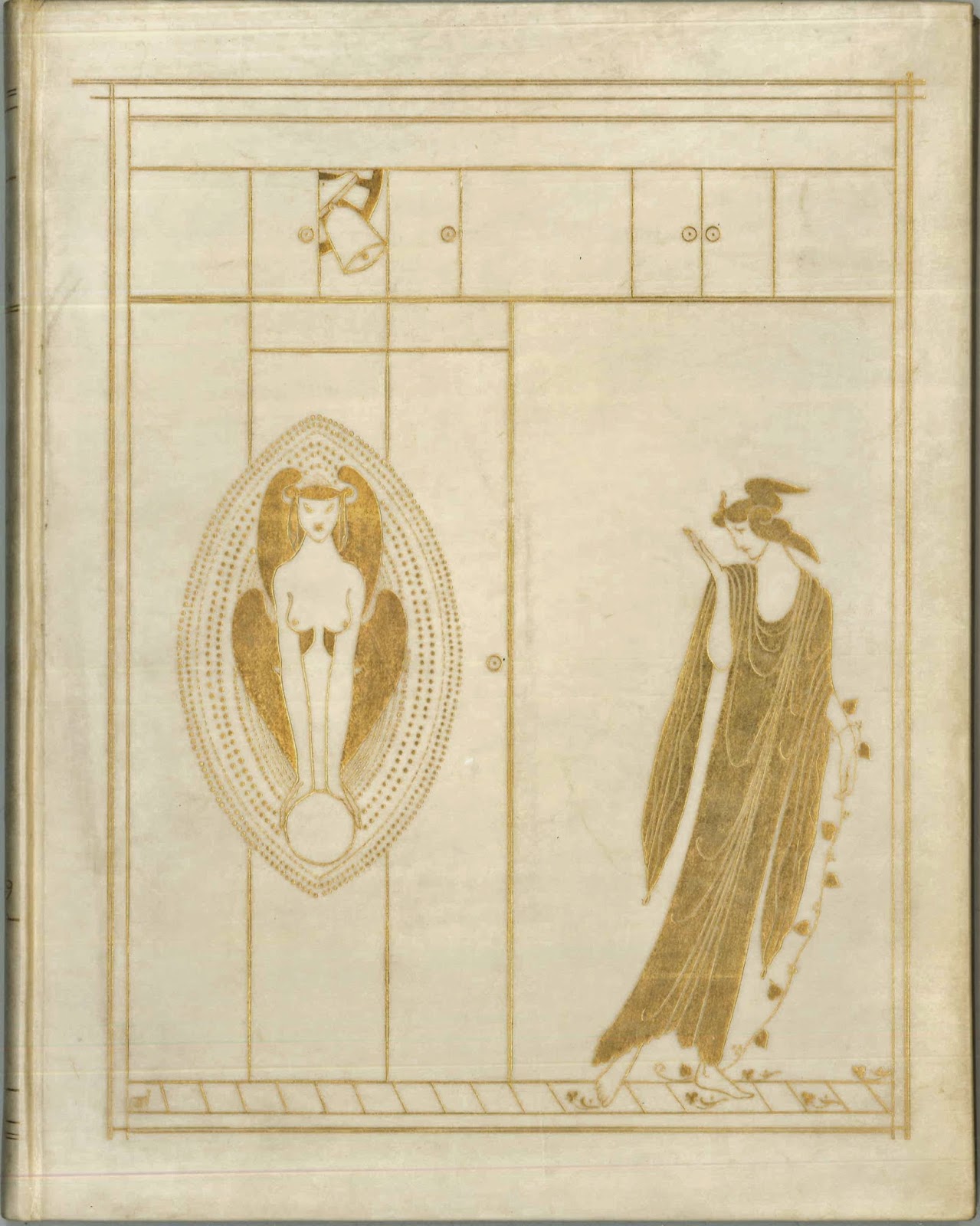 This limited edition had a print run of 200, so only a third of the copies had found buyers at that point. The statement refers to two different states of the book: the more luxurious, large-paper copy sold for over four pounds while the small paper copy was priced at 35 shillings. 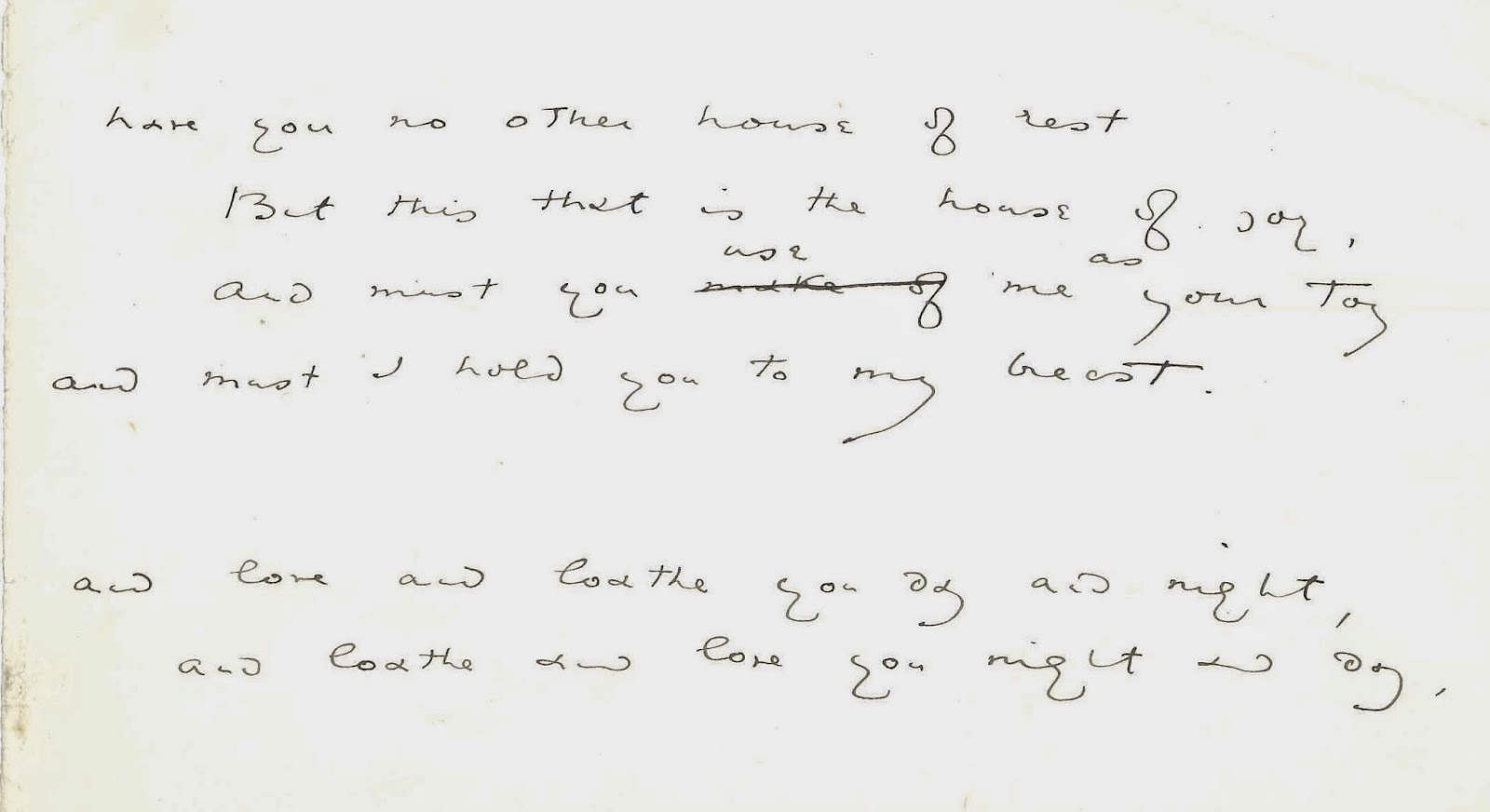 Our second copy of the same book lacks the glamor of manuscript inserts, but has a watercolor of an Egyptian scene painted beneath the half title. We haven't figured out who the painter is (the signature looks like "Bamdin") but it is clearly not in the style of Charles Ricketts' illustrations. 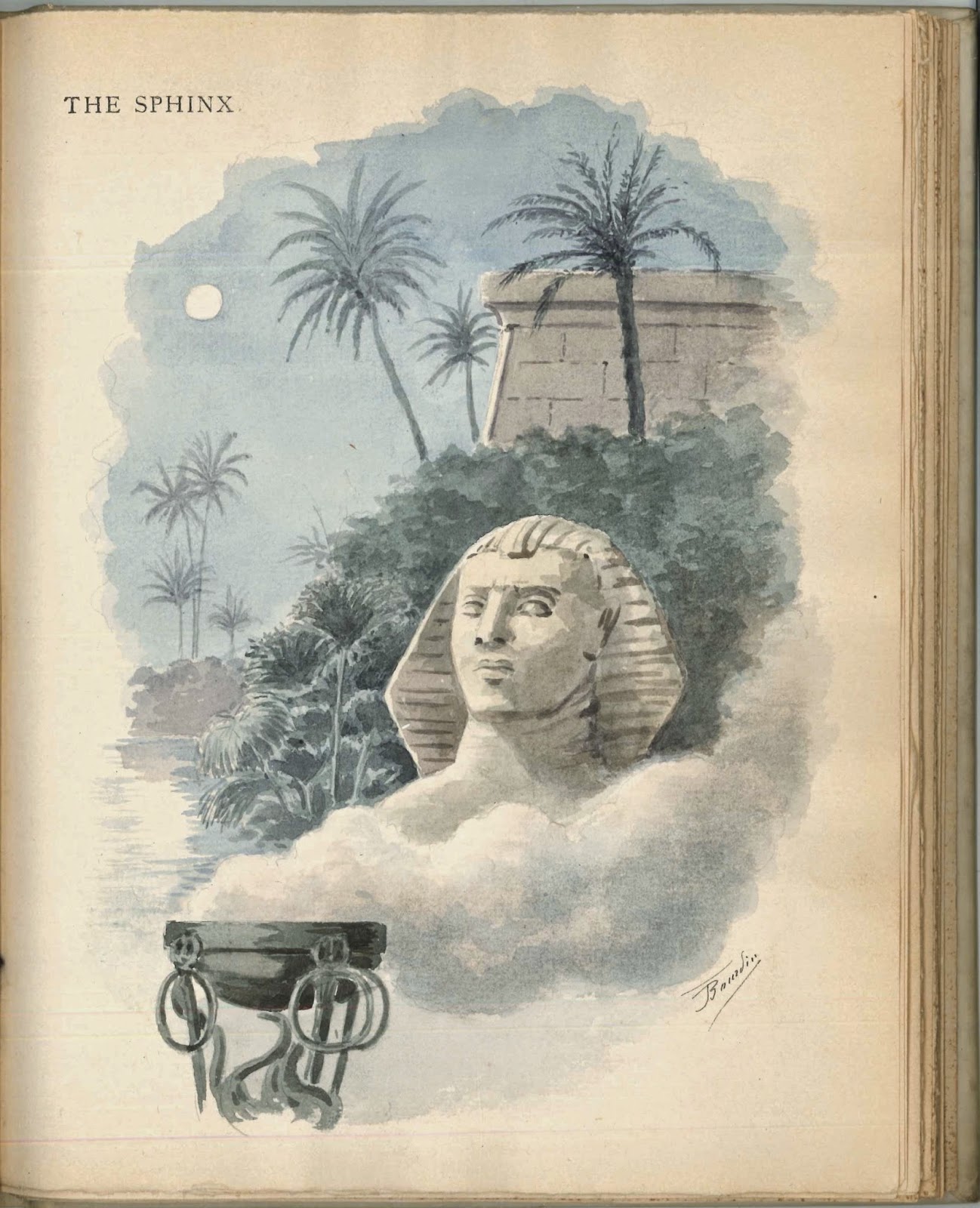 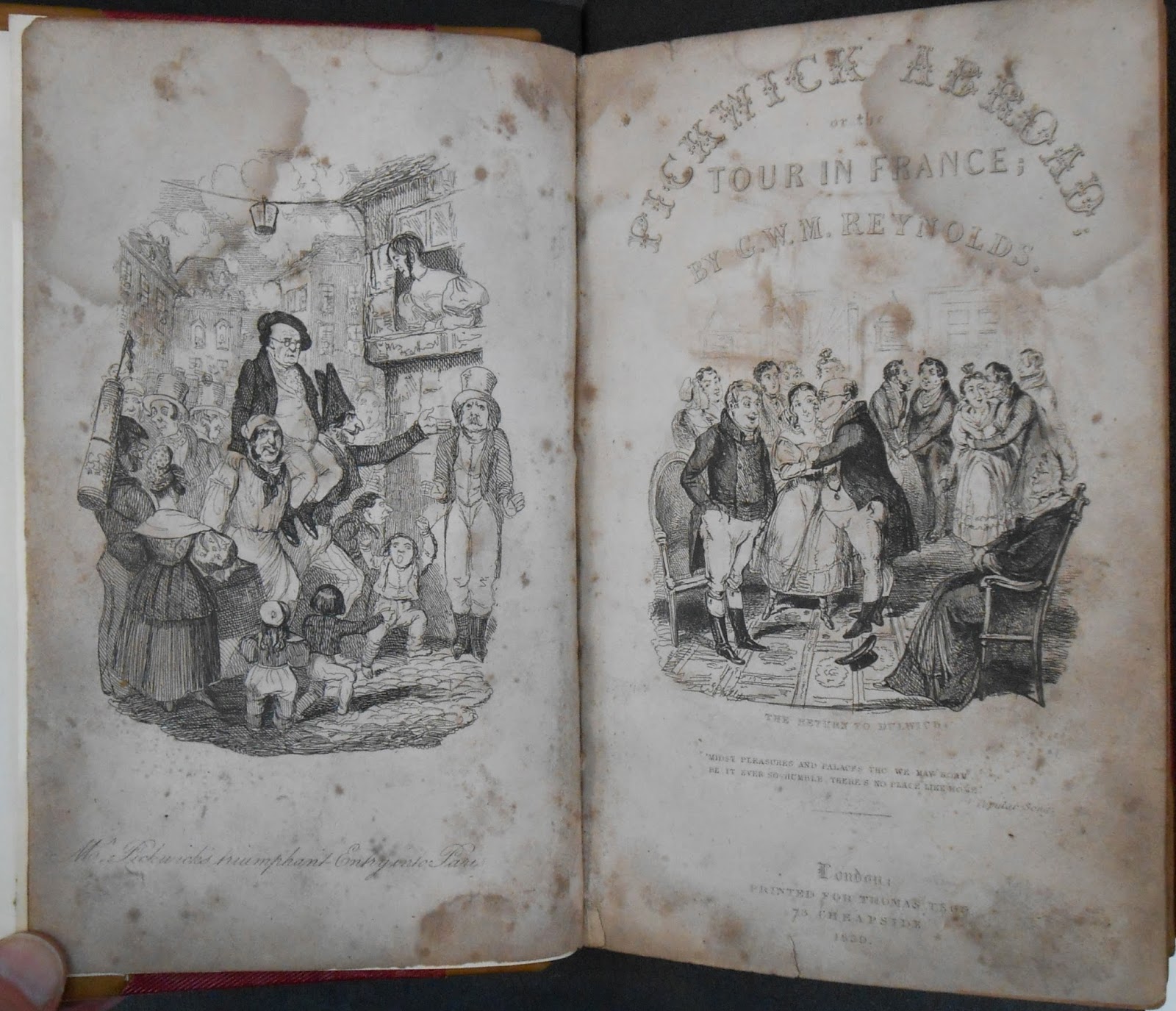 Well, not exactly, "fan" fiction, but of the same ilk. After the success of Charles Dickens' Posthumous Papers of the Pickwick Club in 1837, George Reynolds took the characters on a new picaresque journey in Pickwick Abroad: or, the Tour in France published in monthly parts from 1837-38.  Our first single-volume edition from 1839 acknowledges its debt to Mr. Dickens (or "Boz"), but also cites a review from The Age boasting that "'Pickwick Abroad' is so well done by G. W. M. Reynolds, that we must warn Boz to look to his laurels." Reynolds was surely throwing down the gauntlet, but by using Dickens' own creations. 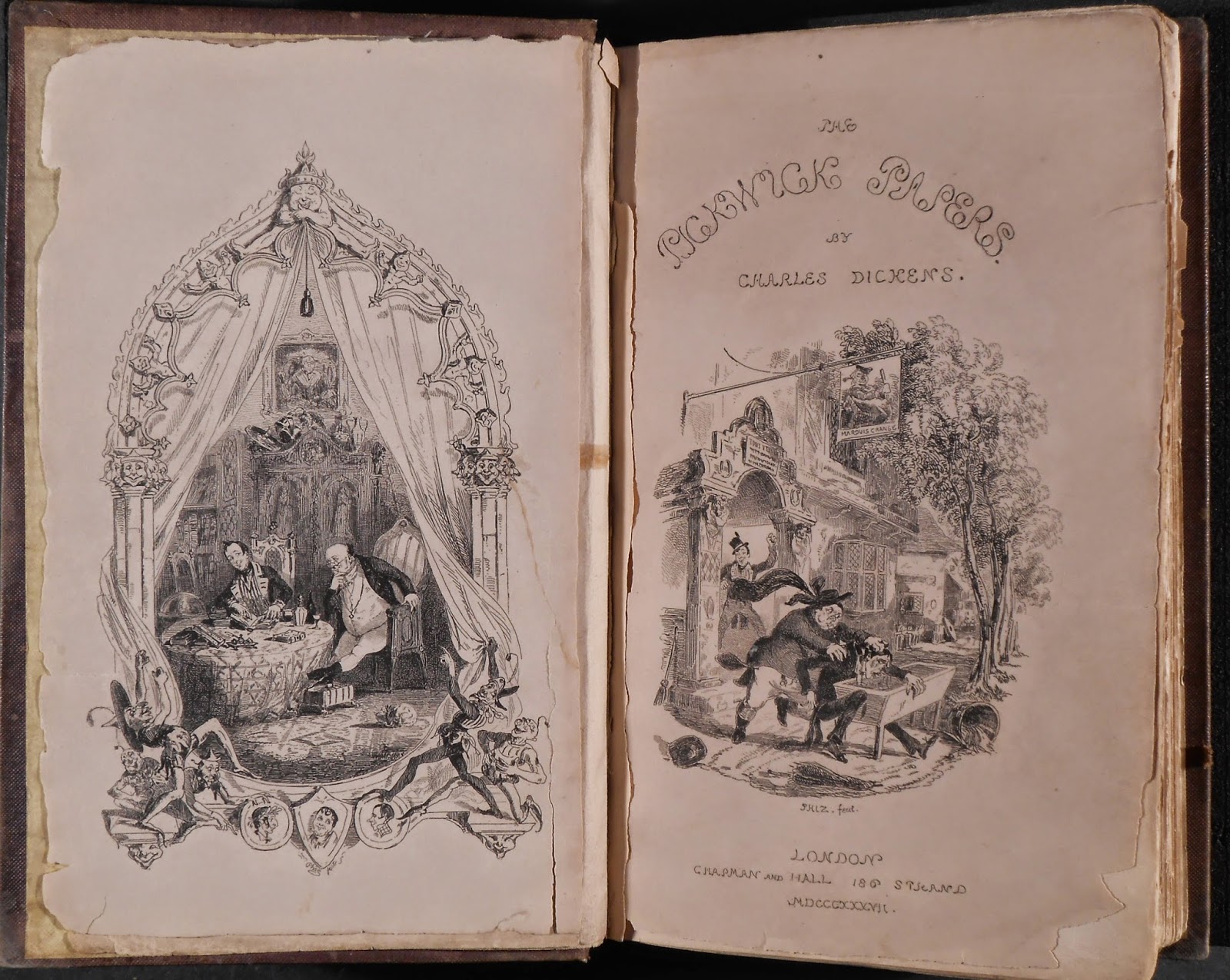 How could this happen? At that time, an author did not have any real rights over the characters he or she created. The original work could get copyright, but the story and the characters were up for grabs. This led to works like Pickwick Abroad as well as other adaptations of popular novels. The law was not changed until Frances Hodgson Burnett fought for full control of her characters later in the century. Pickwick Abroad was a tremendous success that earned Reynolds 800 pounds. 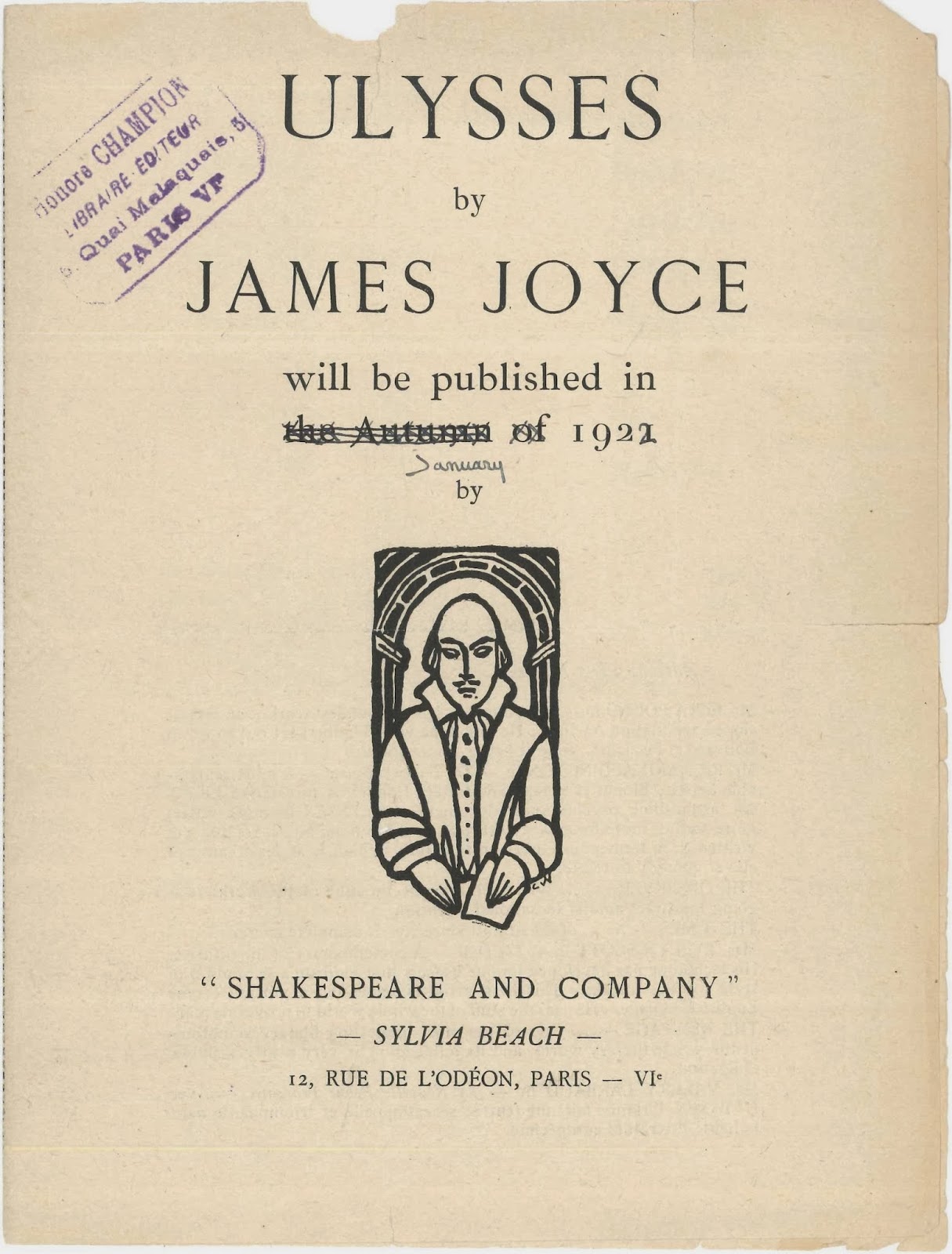 Imagine setting the type for James Joyce's Ulysses.... There is one 43-page run of text that consists of a only six paragraph breaks and no punctuation. Scattered through the book is music, headlines, and a made up word here and there. So it should be no surprise that the first edition ran a little behind schedule.

Laid into our first edition is concrete evidence of Sylvia Beach's frustration: the original prospectus from Shakespeare and Company. "The Autumn of 1921" is mostly scratched out and corrected by hand to read January 1922. Inside, the physical description of the book has been modified from 600 pages to 800 pages (it comes to 732 in the final version). 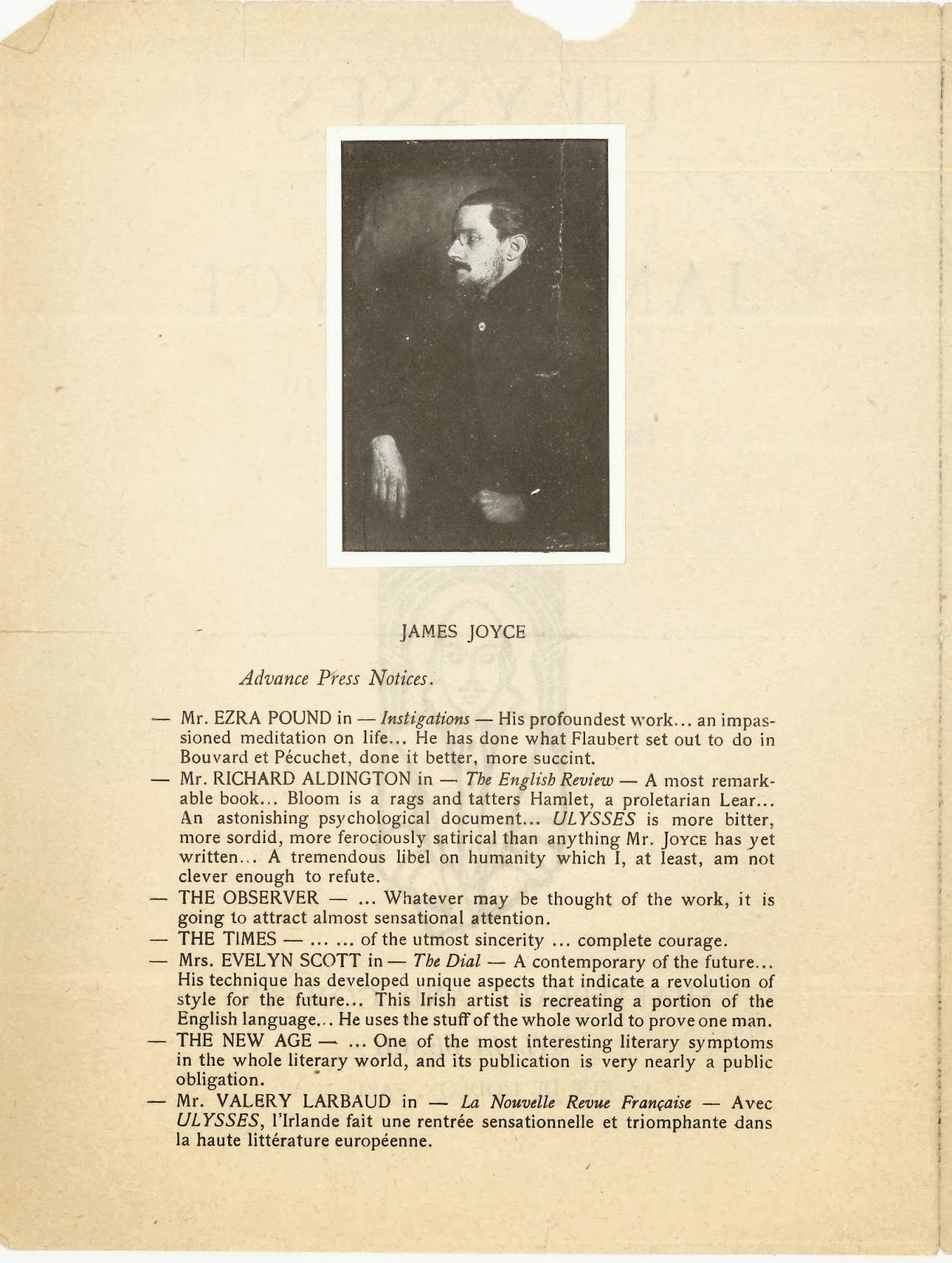 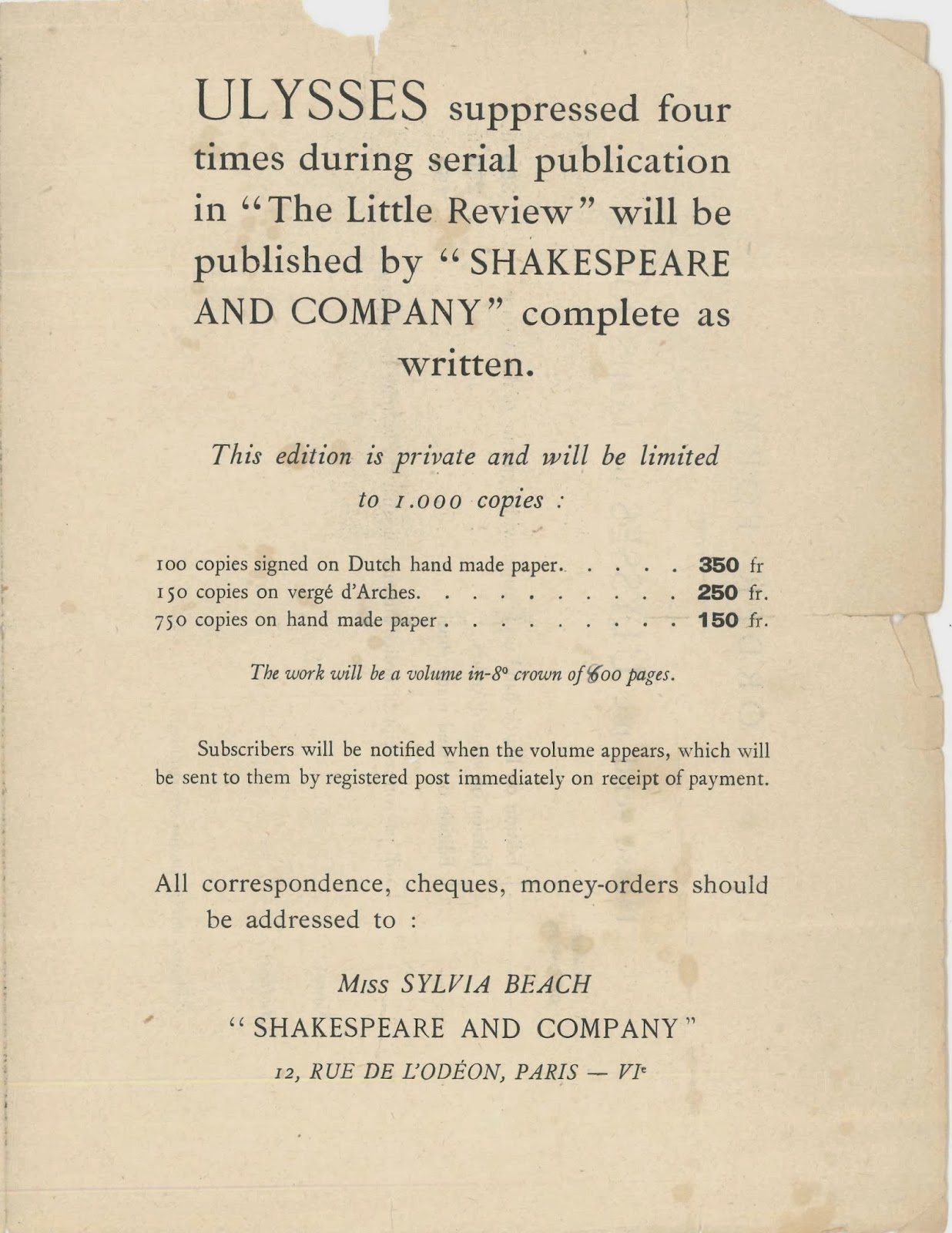 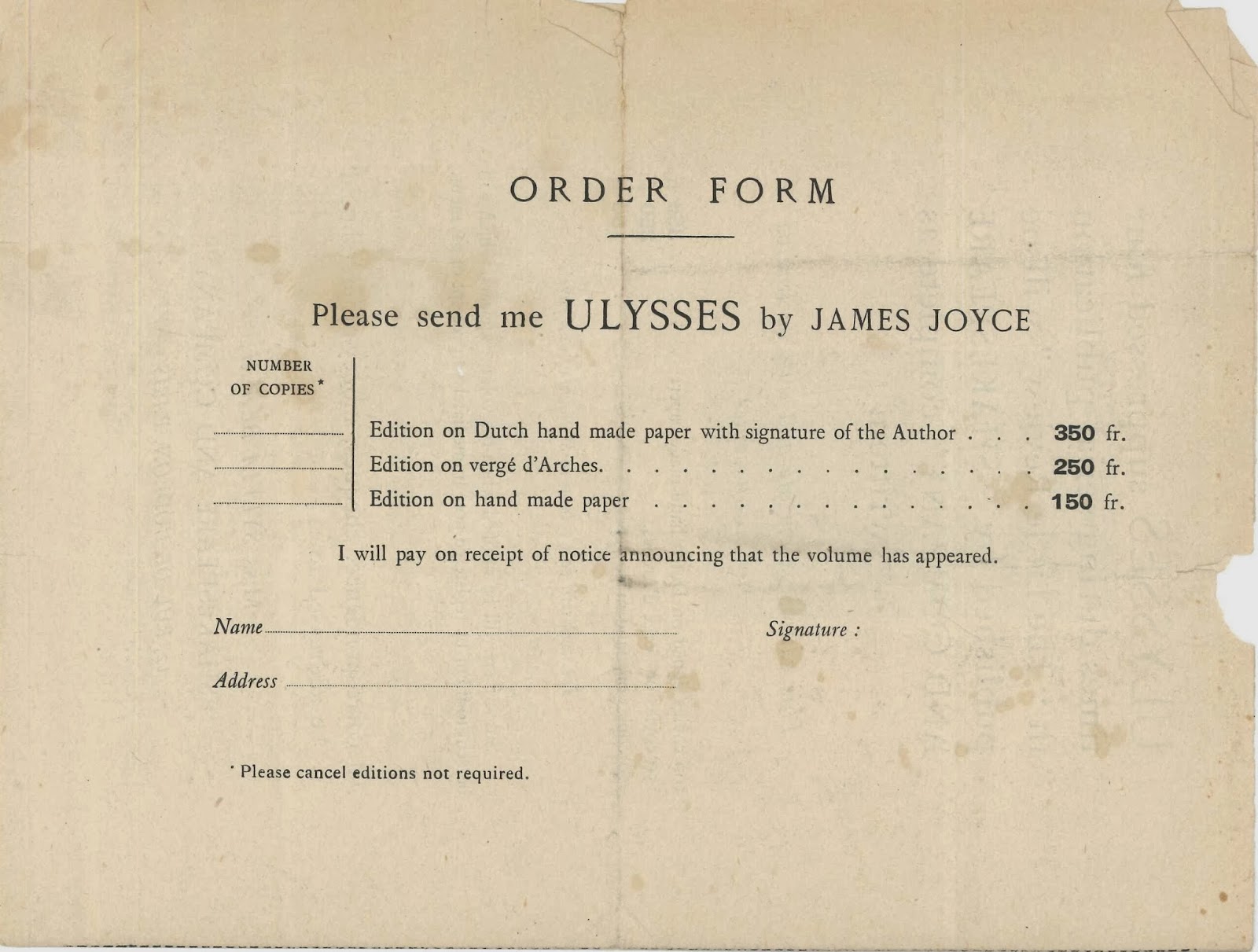 The order form would appeal to any book collector. It advertised the price of 350 francs for the deluxe version on Dutch hand made paper. As of this writing, there are two copies available priced over $200,000. Our copy is the pedestrian 150 franc version on hand made paper.

F. Scott Fitzgerald's The Great Gatsby has become a classic in American literature. It is taught in classes from high school to graduate school, has been adapted multiple times for film, and is lauded by many as the best singular expression of the Jazz age. But, it was not always so well received. In fact, it completely fell out of print for a period. 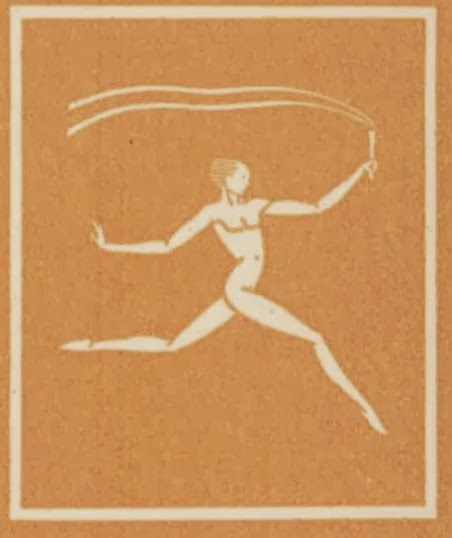 We recently acquired a minor rarity to accompany our first edition: the 1934 Modern Library reprint. At the time, the Modern Library was the premier publisher of inexpensive reprints of popular literary novels. Their famous Promethean trademark usually assured solid sales. But it couldn't work its magic for The Great Gatsby, a novel of 1920's excess that lost its glamor during the Great Depression. The Modern Library printed only 5,000 copies. After five years, the initial printing still has not sold out, and they reluctantly discontinued the title.

Our copy is unusual because it appears to have actually been sold--it lacks the "Discontinued" stamp usually found on Modern Library editions of Gatsby.

Prang's inexpensive color lithography technique revolutionized advertising and made color greeting cards commonplace. His work appeared in millions of scrapbooks in the the late 19th century. He also made novelty books like this shaped book of Little Red Riding Hood.

In the original Perrault telling of Little Red Riding Hood, our young heroine is eaten by the wolf. It is a cautionary tale about the wolves of the world that stalk young women. But the story has become much nicer over time. But in this 1863 edition, Little Read Riding Hood is saved at the last minute by a hunter--not even her grandmother dies. It still has a cautionary moral at the end, but it only reminds the young to shape up and obey their mothers.

Eerily, when you open the book, it looks remarkably like a tombstone.