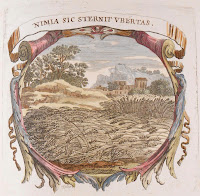 Last week, Dick Hoefnagel, a longtime friend of the Dartmouth College Library, passed away. In his memory, today we blog one of his favorite books from the collection: one he admired, wrote about, and connected with personally. The book is an exquisitely executed seventeenth-century emblem book with hand-colored engravings and text in manuscript.

According to Hoefnagel's research published in the Library Bulletin 11/1 (November 1970), the engravings were signed by Jean Dolivar, a Spanish artist born in 1641, and the nephew of Jean Lepaute, one of the great masters of the Louis XIV style. Illustrated here is Emblem I described by Dick thusly: 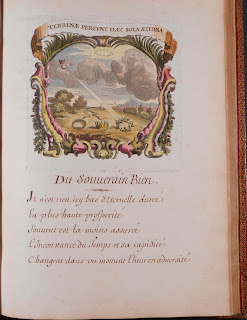 This emblem contrasts the perishable felicities of life on earth with the eternal bliss of heaven. The symbolism is conventional and includes the ancient belief that laurel, usually representing virtue, is never struck by lightning. The choice of the number twelve in the crown of stars may have a biblical derivation (the tiara of the traveling woman of St. John, Revelation 12:1-6; the twelve patriarchs of Israel) or refer to the ultimate origin of such symbolisms, namely the astrological system of the twelve constellations of the Zodiac.

It is a beautiful book and worth your time. Come in and ask for Codex Manuscript 002066. 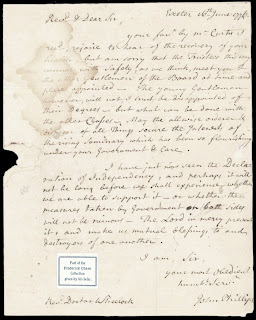 By 1776, Dartmouth College had been operating in Hanover for nearly six years, its student body had expanded from the 4 original students who came north with Eleazar Wheelock to about 90, and significant growth also had occurred in the population of the town. Clearly, Wheelock's enterprise was off to a very successful start.

However, with unrest growing between the colonies and Great Britain, the College feared breaks with its patrons and the resulting financial hardships. New Hampshire's Royal Governor John Wentworth, who had been instrumental in the College acquiring its charter in 1769 and on many occasions in disagreement with the Crown on its handling of the colonies, nevertheless had been forced to leave New Hampshire, perceived as a loyalist.

On June 16, 1776, John Phillips, prosperous and influential businessman, Dartmouth Trustee and, several years later, founder of Phillips Exeter Academy, wrote to President Wheelock from Exeter. He and other trustees in that area had determined it was unsafe to travel to Hanover for Commencement. He also mentioned that he had seen the Declaration of Independence:

"I have just now seen the Declaration of Independency, and perhaps it will not be long before we shall experience whether we are able to support it - or whether the measures taken by Government on both sides will not be ruinous - The Lord in mercy prevent it, and make us mutual blessings to and [not] destroyers of one another." 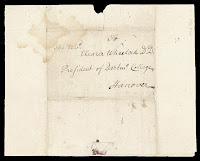 It is not completely evident how an Exeter merchant, albeit an important one, would have had access to the document. On the other hand, some scholars contend that there were dozens of declarations and legislative acts relating to separating from Great Britain issued by individual colonies prior to the document drafted and adopted by the Continental Congress in July. Could Phillips be referring to a New Hampshire effort? We would like to believe that he is speaking of THE declaration! 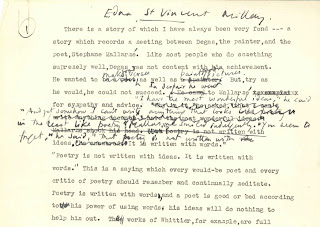 Introducing a speaker is always tricky. You want to be witty and urbane, but at the same time honor the seriousness of the moment. All of the attention must be deflected to the honored guest, but if you give a bad introduction, everyone will remember. It is trickier still if you are introducing a great poet known for her attentive use of language while you yourself are famous for your way with words.

Among our small collection of the Papers of Aldous Huxley, is a heavily annotated, undated, draft of an introduction that Huxley once gave for Edna St. Vincent Millay. The draft shows Huxley's struggles to get the tone just right--making small changes like substituting "impetuous current" for "onrush" and revamping entire sentences then rejecting them altogether. His final version captures the force of Milley's poetry and then summons her to the stage:

Like the Elizabethans, she seems constantly on the verge of being swept off her feet by the impetuous current of her own eloquence; but just as it seems inevitable that she should fall, the headlong movement is miraculously transformed before your eyes into a tissue of the Dance, into some beautiful gesture, entirely unexpected and novel, and entirely satisfying. 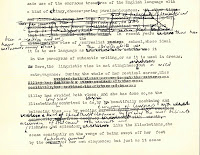 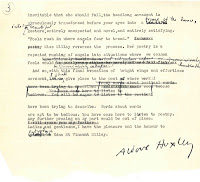 The same could be said for Huxley's introduction--a beautiful work in itself.  Come read it and see all of his changes by asking for MS 268, Box 1.

The Exposition Internationale des Arts et Techniques dans la Vie Moderne was held in Paris in the spring and summer of 1937. The Peace Pavilion was to be the culminating point of the exhibition and was dedicated to the "support of propaganda in favour of Peace." However, the Peace Pavilion's impact was overshadowed by the physical juxtaposition of the Nazi and Soviet pavilions. Situated directly across from one another, the two pavilions displayed each country's respective views on nationalism and politics through architectural motifs and created a visual preview of the coming world conflict.

There is little mention of these issues in our small collection of materials on the Expo. Instead, we have Churchill Lathrop's Carte de Légitimation and a handful of maps, pamphlets, postcards, and other ephemera. See the sights of Paris as featured on a folding guide to the Paris Metro. Dine on traditional British food at the British pavilion (though why one would when there were so many other options remains an open question). Travel to other parts of France on the "railway of the sea." All the usual things that the ordinary visitor would need during his or her visit to the continent. 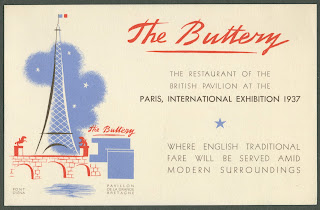 Interestingly enough, though Lathrop was an Art History professor at Dartmouth, no mention is made of Picasso's Guernica which was exhibited for the first time in the Spanish pavilion at the Exposition.

Ask for MS-1015. A guide to the collection is available. 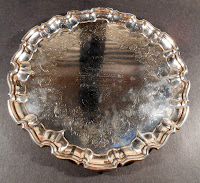 Shipwrecks capture the imagination with epic tales of tragedy and heroism. From Robinson Crusoe to Life of Pi, shipwrecks have provided readers stories of life and death they just can’t put down. While Rauner has endless books on shipwrecks, it also has its own relics of a voyage gone wrong. Over the years, a number of tokens from the last voyage of the HMCS Karluk have washed up on Rauner's shelves.

Viljhalmur Stefansson, who taught at Dartmouth from 1947 to 1962, organized the Karluk's voyage to explore the area north of the Canadian coast. Karluk began its journey in June 1913. The Executive Council of British Columbia presented Stefansson with a silver salver upon his departure. However, the crew would soon need more practical goods than an engraved tray. By September 10th, Karluk was ice-bound for the winter. Stefansson became separated from the ship: Karluk began to drift through the ice while he was on a hunting trip with five other members of the expedition. Though Stefansson claimed the separation was accidental, some of the remaining crew saw his departure as the abandonment of a mission he suspected would fail. Stefansson did not return from the trip until 1918 after an extensive exploration that included the discover of new Islands, but the Karluk sunk after months of drifting on January 10th, 1914.

The sinking of Karluk left twenty-two men, one woman and two children stranded on what would become known as "Shipwreck Camp." Divisions between the shipwrecked soon arose on the ice camp. Two parties set out in attempt to reach Wrangel Island and set up a more permanent site on land. These parties overestimated how close they were to the island and the ease with which they could set up a new camp. Both perished in the Arctic conditions. Finally, the main party managed to reach Wrangel Island in March. The captain, Robert Bartlett, and an Inuit hunter, Kataktovic, continued on in search of a means to alert the rest of the world of the fate of Karluk. The rest of the group set up camp, desperately awaiting rescue. Finally, on September 7th, a walrus hunting ship accompanied by Bartlett picked up the fourteen remaining survivors. 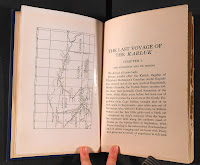 Six survivors would publish first-hand accounts of "the last voyage of the Karluk." Bartlett went on to lead many more Arctic voyages. Stefansson lectured widely on "the Friendly Arctic," organized another ill-fated expedition to Wrangel Island and eventually became the Director of Polar Studies at Dartmouth. You can find much more about the Karluk and practically anything else related to the polar regions by exploring the Stefansson Collection on Polar Exploration. 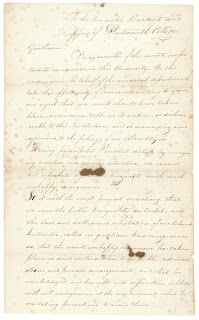 In 1810, a group of Dartmouth Medical School students was caught removing a body from the Norwich, Vermont, cemetery. Bodies for dissection were hard to come by at the time and grave robbing was not as uncommon a practice as one might think. Normally, medical schools obtained bodies from prisons as condemned criminals were often further punished by having their bodies given over to science. However this offered only a limited supply of cadavers for study. The same year Dartmouth opened its medical school, the state of New Hampshire stiffened the penalties for grave robbing knowing that there would be increased demand for the dead.

This letter of apology is telling of the students' attitudes toward the public. In their apology, stated "with the most pungent sensations" they put the burden back onto the people of the town:

Painful considerations force themselves upon us, with increased effect, when we contemplate our fellow citizens, in the neighboring villages, trembling for the relics of their dead, which, they have long been educated, to hold sacred; the unlawful removal of which, in their view, can be nothing short of sacrilege. 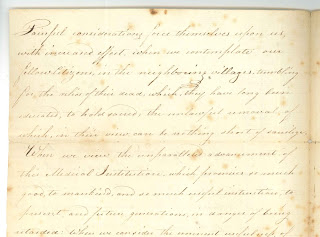 The villagers are reduced to trembling, uneducated peons who seem unable to differentiate between the relic and the reality. It seems the medical students are not so much sorry about what they did, but that the superstitious townspeople believe it wrong.

There are gruesome stories in the Archives. This letter is featured in the current exhibit, The Body: Depressed, Flayed, and Stolen from the Grave curated by members of Sienna Craig's "The Values of Medicine" class.  It will be on display through June 20th, after which you can ask for Mss 810900.6. 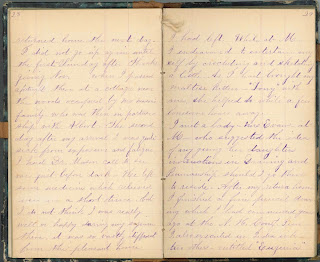 "I had Dr. Mason call to see me first--before dark--He left some medicine which relieved me in a short-time, but I do not think I was really well or happy during my sojourn there. It was so vastly different from the pleasant home I had left. While at Mo__ I endeavored to entertain myself by crocheting and sketching a little. As I had brought my maltese kitten--'Tony' with me, she helped to while a few lonesome hours away."

This quotation appears in a diary we just acquired by Harriet Burleigh Janes. Janes was a Laconia, New Hampshire, native who wrote fiction under the name Effie Ray. Born May 27, 1845, Harriet Burleigh was writing and illustrating hand-sewn miniature books by the age of seven. At 18, her work was in print; A Letter From Effie Ray was published in the Trumpet and Freeman: A Universalist Magazine in 1863. Over the next several years, her short stories appeared in The Yankee Blade and The American Union. She was working on a novel, Leander, or The Haunted Manor, at the time of her death at age 30.

The diary will join her papers housed in Rauner Library. The collection includes her miniature books, drawings and other manuscripts. Perhaps the most curious part of the collection is the "spirit writings," many purportedly by Harriet Janes, that her grieving family received after her early death.

To learn more about this little known writer, ask for MS-844. 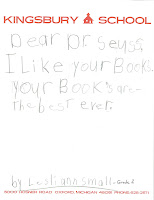 Like the rest of the country, we have had school children on our minds this week. We were reminded of a batch of very sweet letters in our Ted Geisel collection addressed to Dr. Seuss. It seemed like a good time to share a few, as well as one of Seuss's replies. 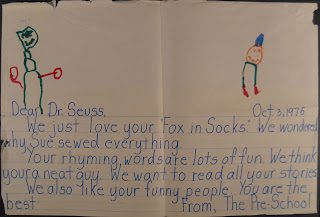 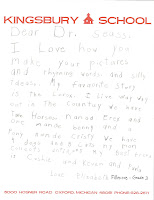 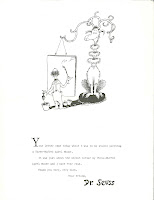